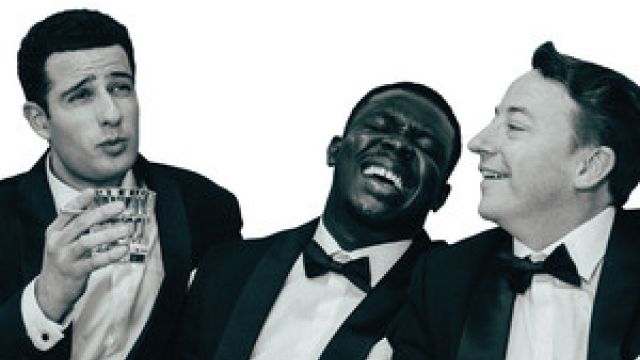 The Rad Pak is billed as “A sophisticated lounge act with some of Adelaide's best entertainers, paying tribute to the Rat Pack era”.

Playing in the Top of the Ark at the Arkaba hotel, an enthusiastic crowd gathered on a Sunday afternoon to hear three crooners pay homage to the sophistication and songs of the original Rat Pack.

The idea that the show is a ‘tribute not imitation’ comes from Michael Coumi, who plays the part of Dean Martin. He is assisted on stage by Doug Phillips as Frank Sinatra and Stephen Tongun as Sammy Davis Jr (along with Louis Armstrong and Cab Calloway moments).

Over approximately an hour, these three gentlemen, backed by an excellent band ‘Breezin’, travel through many of the hits made famous by these wonderful crooners. Resplendent in tuxedos, complete with onstage bar and drinks in hand, they had certainly gone to a lot of trouble to recreate the era and style of the Rat pack. Sadly at this opening show, whether it was sound balance issues or ill-placed foldback there were quite a few times in the show where voices seemed too loud or quite pitchy. Hopefully by their second show these issues will be rectified.

Whilst also good attempts were made at recreating the banter style of the originals, Coumi, Phillips and Tongun didn’t quite hit the mark as their banter seemed too scripted, needing to be more flowing and casual. Pace picked up in the second act as they warmed into their roles, but a little too late to keep this reviewer’s attention.

There were some excellent moments, such as Tongun’s quite gravelly performance of “Minnie the Moocher” and performances of “Sway” and “That’s Life”, but the absolute highlight of the show was when the trio was joined by the very talented Stefanie Rossi, who brought real stage presence and class to the show. A stunning voice.
All in all, the show is a great concept but there needs to be some further development of the through-lines that link it together and some sound issues that need resolution.

The older demographic in the crowd however, seemed to enjoy it all and really that’s what entertainment is all about.