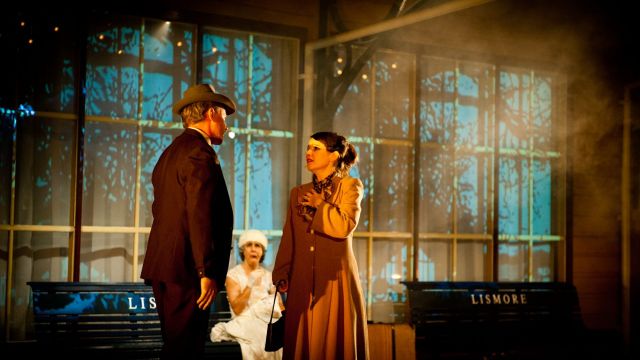 Railway Wonderland is the best site-specific theatre piece I have ever seen. A 90-minute immersive play with music that crosses multiple genres, performed in a commedia dell’arte style.

Set in a railway station waiting room and performed in Lismore’s historic disused station (now a bus depot), four unrelated characters wait for a bus: a young girl who has been dumped by her boyfriend, a nervous young man off to tell his mother he’s gay, an obsessive time and train freak, and a Karaoke champion off to try his luck in the big-time and audition for Australia’s Got Talent. Soon they are joined by an old Italian woman, Ana (who could or could not be a ghost), and it’s her story they all become embroiled in. Ana’s experiences as a 16 year-old immigrant bride move between her fantasy of her life as a movie and the reality of what actually happened. The quintessential railway station waiting room film, Noel Coward’s Brief Encounter is referenced to maximum effect as her fantasy, whilst silent movie techniques are used for her reality sequences to her husband Giacomo.

But these are not the only stories of arrivals and departures that make up Railway Wonderland which finds the versatile ensemble cast of five switching between multiple characters effortlessly. Katie Molino was a feisty and sympathetic Ana, whether spouting unwanted motherly advice or belting out fifties Italian pop songs like “Volare” or “Ciao, Ciao Bambino”, her portrayal was honest and truthful. Helen Christinson shone as a foul-mouthed teenager who’d been dumped, and beautifully captured, in a thumb-nail sketch, Laura’s Brief Encounter. As her opposite half in the Encounter Alex, Jo Turner was stiff-upper-lip personified, and great fun as the wanna-be rock star Garry. Philip Blackman brought exemplary mime skills to Giacomo, whilst Demetrios Sirilas’ Vietnam draftee Marco was poignant. Accompaniment on keyboard and percussion added colour to the vignettes with occasional bursts of a capella vocal work by the Vox Caldera Choir who opened with a Beatles medley and later harmonised well on “Well Meet Again” for a 1940s sequence. William Kutana’s costumes instantly evoked the various periods, whilst Emma Saunders’ movement arrested with its precision.

Technical, lighting and video was spot on. Lastly one is left with admiration for Julian Lewis’ overall concept and his directorial execution of it - poetic images of Ana arriving down the platform on a luggage trolley doubling as a train and Ana’s husband dancing away from her down the platform in a swirl of steam are evocatively memorable. Not to be diminished is Janis Balodis’ contribution to the work with naturalistic and funny dialogue.

This is the second production of Railway Wonderland, which was originally mounted by NORPA in 2012 in a sold-out season. The current season has done likewise. Word is that the show will tour, and with the number of disused railway stations in the country it won’t be short of venues. If it comes to one near you, don’t miss it. It’s a totally engrossing, engaging and warm piece of theatre and what’s more it’s massively entertaining.