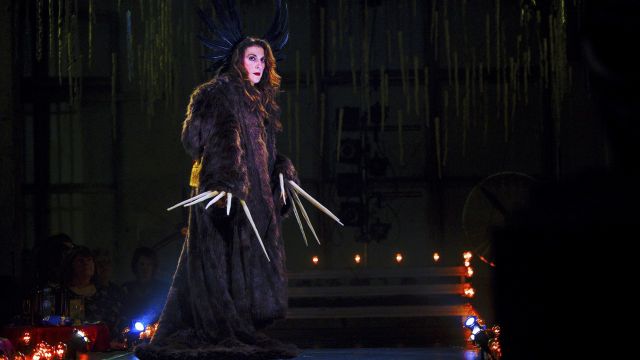 While The Rupture has not been described as a work of ecofeminism, Chapter II brings Finucane’s work much closer to this realm. Here she makes strong links between patriarchal structures and the threat to the environment. Finucane opens the performance dressed as a fantastical ice queen, typical of her magic realism, and both the feminist and ecological messages are merged. This sequence speaks to the ways in which patriarchal ideology is often self-imposed by women and this is immediately juxtaposed with the destruction of Antarctic glaciers. 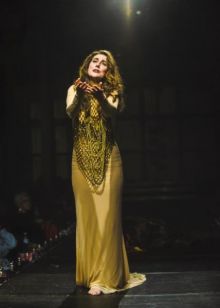 The melting ice of the Antarctic, the exploitation and destruction of land and water, and the continued dispossession of Indigenous Australians are among the issues at the heart of this show. Chapter II is less strident and obtuse in its messaging and more gleefully embraces playful parody. The Gesamtkunstwerk enhances Finucane’s flirtations with disinhibition in order to denounce urgent social and political concerns such as damaging fishing practices, global warming and the systemic extinction of Aboriginal language and culture. The styles range from hard core punk rock performance to Finucane’s unwavering and extravagant gesturing to gothic imagery. However, this show even includes a total abandonment of the hyper-stylised performance mode to favour anecdotal storytelling. All of this is employed to express her exasperation, anger and frustration at these horrific realities. Finucane’s language is always prolific, poetic and acerbic while frequently imbued with monstrous imagery. Yet, the performance is also characterised by a strong sense of humour and clever use of satire that makes it unequivocally entertaining.

Singers Mama Alto, Piera Dennerstein, pianist Rachel Lewindon and the special guest appearance of Ray Dimarrkari Dixon all contribute to the sublime atmosphere that is established and sustained from start to finish. The vocal capacity of the singers is extraordinary and the energy which emanates from the music elicits powerful and dramatic emotions. The sensational states of exhilaration that are continually evoked throughout this show are sometimes as uplifting as they are confronting. Finucane’s incredible talent as a specialist in creating unforgettable, absorbing and transformative theatrical extravaganzas is not to be missed.