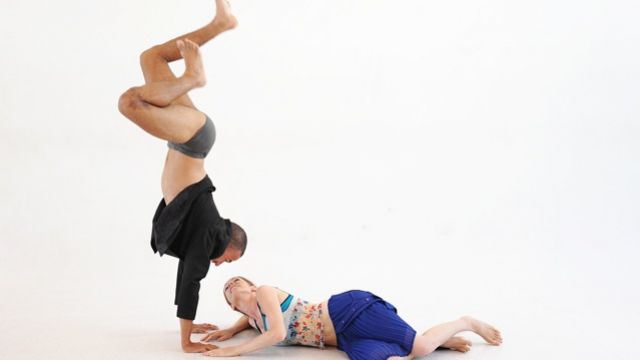 Form and Dance Bites have brought some exciting new choreography and performers to their audiences. Reflect is no exception. In fact, the choreography is so intricately specific that one has to marvel at the creative concentration and collaboration of choreographer Sue Peacock and production designer Andrew Lake and the time it must take to conceive and plan a piece such as this. Not only are there five performers, but each presents a different ‘character’ with intrinsically personal movements and reactions that change subtly as they begin to interact and, in so doing, expose a narrative that is at once suggestive but always, like memory, a little obscured.

On a white floor, the dancers – Storm Helmore, Kynan Hughes, Jenni Large, Bernadette Lewis and Tyrone Robinson – establish their characters with individual movements, some small and finely restricted, others more flowing, but always tightly controlled. It is not until they begin to undress with almost erotic precision that they make more specific contact in passing connections and disconnections that become more intimate and racy. They dance with intense precision, tiny movements juxtaposed with swift reactions, carefully controlled falls, twists round and under each other and extended moments of complete stillness. This is intuitive, creative choreography that must inspire and excite performers. Projected images on a wide screen behind the stage extends the perspective of the performance, and allows the extra dimension of silhouetting the dancers as they move into the projected light before the screen. Here again, Peacock and Lake show how close is their understanding of each other’s ideas and perceptions, and their ability to realise them on the stage, as do their use of the unexpected, of changes in pace and mood, and the addition of humour and surprise

So many emotions and relationships are depicted in this performance, some in complete silence, but the choice of backing effects by sound designer Ben Taafe adds even more atmospheric dimension to a performance that confronts at times, brings a smile at others but constantly impresses. The athleticism, energy and combined talent of the performers goes without saying – but their depiction of character through passing facial expressions, almost perceived smiles, readable eyes and tiny movements is the essence of theatre in contemporary dance.