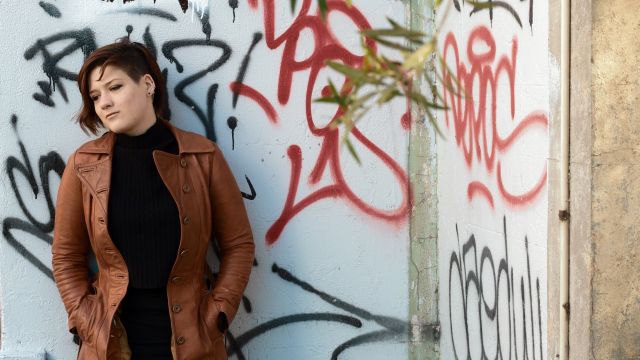 Will (Tim Constantine), a twenty-five-year-old guy whose life seems to be going nowhere, is offered a chance to take part in a medical/scientific experiment that will take him back ten years into his own past. The confident, not to say arrogant doctor, Tyler (Tom Reed) emphasises to Will that this does not involve time travel.  Rather it will be a drilling down into Will’s memory - assuming that every experience that Will (or anyone) has ever had is buried or not so buried in his brain.  With some trepidation, Will agrees…  And confronts his fifteen-year-old self (Jason Jeffries) only to find that this former self is a cocky, foul-mouthed loner - not what he expected – that is, not what he remembered - or wanted to remember.

That’s the hook – and it’s a good one.  To go back in time for a ‘second chance’ is an enduring fantasy desire, but usually couched as comedy.  (In movies, Back To The Future, Peggy Sue Got Married).  Regression has some wry and black humour, but it is no comedy.  The real pain, anger and guilt dramatised in this play comes partly from the fact that, of course, there is no ‘second chance’.  A failure in the past remains a failure.  The experiment goes awry when a fourteen-year-old girl, Julie (Samantha Cunnane) also materialises in Will’s memory so that Will, Young Will and Julie are all present.  Did Young Will love Julie?  Did he love her enough?  The logic behind this development may be dodgy, but the audience is gripped.

As adult Will, Mr Constantine plays a man who knows he’s adrift, knows his youthful hopes are dashed; the actor doesn’t try to overcome the fact that Will is not likeable, nor, in the present, all that interesting.  Mr Constantine exhibits an underplayed naturalism that provides a fine contrast to his outbreaks of anger – such as pouring scorn on Young Will – which he’s able to do because he knows exactly how Young Will’s next ten years went/will go.  Jason Jeffries might improve his diction just a tad, but he is entirely convincing as Young Will, a self-righteous teen refusing to believe things don’t/won’t go as he’s so sure they will.  As Tyler, Mr Reed is nicely sure of himself, bullying and demeaning, but the role is functional: the character is a device – as is that of Julie, but Ms Cunnane brings a touching sweetness, vulnerability and a hint of steel to her small part.

According to the program notes, Gabriel Bergmoser wrote Regression as a naturalistic piece (despite its sci-fi basis).  I can’t say what that would have looked like, but director Joachim Matschoss has ‘deconstructed’ Mr Burgmoser’s text and it runs a tight, pacey bare fifty minutes.  He’s added non-naturalistic elements (the intent of not all of which is clear) and disturbing projections of urban decay and extreme close-ups of Julie, Young Will and (I think) adult Will.  With his wide experience outside Australia, Mr Matschoss brings a European sensibility to the drama so that it becomes more cerebral, more philosophical despite the emotions generated by confrontations between past and present.

Emotion and needing to know what happens next carry the piece forward over time jumps and minimum explanation.  Of course, it is necessary to suspend disbelief, not just in the feasibility of such an ‘experiment’ but also in the emotional logic of the way Will and Young Will display such aggression toward each other.  Once past that, we say, ‘why not?’ – as both man and boy are robbed of certainty.

Mr Matschoss, aided by Kevin Clough’s lighting and sound design, increases the theatricality by putting the audience on three sides of the central action, but also using almost all of the Allpress Studio’s large, high ceiling, white wall space.  So Dr Tyler can observe his experiments from outside the central space; Will, Young Will and Julie can move behind portions of the audience, but stay in view, and they can head for the actual exit when things become too threatening.  We might question the logic of the piece’s resolution, which feels a little rushed, but no matter; we have been engaged, as writer and director want, in the question of what we would do if we met our past selves.  A most interesting new play in an exciting new space.