The Rehearsal, Playing the Dane 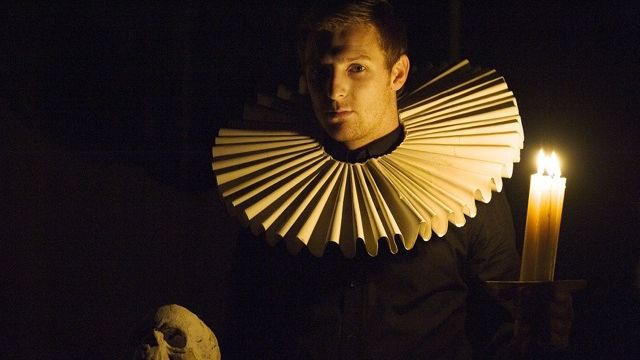 The Rehearsal, Playing the Dane by Ireland’s Pan Pan Theatre gets up to a lot of mischief with Shakespeare’s towering tragedy, Hamlet. With a big cast and striking stage design, it promises an assault on the play we all think we know, and doesn’t disappoint.

The jokes and puns begin when the audience arrives in the theatre to find two actors tossing a bone (the iconic skull) to a great dane, who leaps about the stage.  A line of actors read out scenes from Hamlet, and have to call on a random audience member when they are one performer short. Three potential Hamlets front up to an audition panel, and the play gains momentum as a competition begins between them. The first actor (Derrick Devine) tries to out-Hamlet Hamlet, and ends up being asked to read one of the play's least important parts. The second actor (Conor Madden) weaves his own comical life story into the performance, while the third (Bashir Moukarzel) plays it straight and brilliant. The audience is asked to choose which Hamlet they’d prefer, and opts for Conor Madden. He’s outlandish, and could take the role anywhere, and this is what the audience has come for.

Curiously, the Second Act is more like a ‘greatest hits’ of Hamlet, with key scenes played in a fairly conventional way. While it is interesting that the two other possible Hamlets shadow the chosen one, reciting the words along with him, they too play it straight. It's like The Rehearsal wants it both ways - to turn Hamlet upside down, and then revert to the old-school traditional reading of it.

The play takes another interesting turn when a group of child and teenage actors arrive, taking on major roles. This part of the play has the look and feel of a late-night, secret meeting of the 'dead playwright’s society'. The much-loved ‘graveyard scene’ is temporarily in the hands of Trinity Grammar School boys. Turns out they have all the mirth, dark humour and talent you’d expect from a production of Hamlet. The students are terrific, and very funny, but once they're gone, the play goes back to another traditional scene, this time with Ophelia (Judith Roddy).

To challenge the audience even further, there are references to Samuel Beckett, including a mash-up of Hamlet with Beckett's Endgame towards the end of the first act. While that particular scene is brilliant - and will make you want to go out and read Beckett and see his plays - it is hard to understand the link between Hamlet and Endgame. You'd have to be a literature professor to make the connection. A lot of people will be left wondering what The Rehearsal is all about.