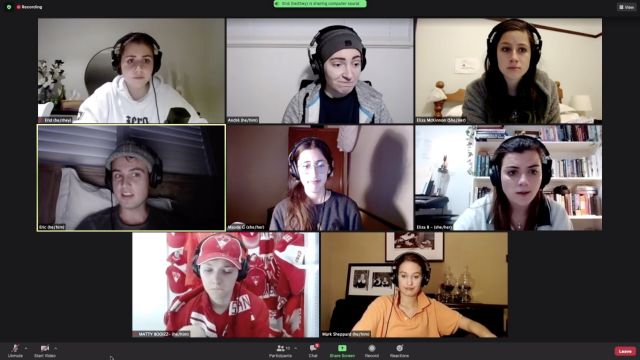 The premise of REVISIT.exe is a student assignment in a university degree course (Humanities, of course), ominously titled ‘Ethics, Responsibility & Certainty’.  The assignment requires a decision on the ethical question at the heart of Friedrich Dürrenmatt’s 1956 play, The Visit.  Was it ‘right’ for the dying town of Güllen to kill Anton Schill so as to benefit from the largesse of his former lover, billionairess Claire Zachanaissian?  That is, is an immoral act that will benefit thousands right or wrong?  Tick the box: Yes, or no?  The even more ludicrous catch to this ‘assignment’ is that the decision of the class must be unanimous, or they all fail.  The satirical intent, with a range of targets, is apparent – not the least of which are the students themselves.

They meet on Zoom – as you do nowadays – and they are a disparate bunch, ranging across social classes and sexuality - some trans, some straight, some gay (?), some possibly making up their minds.  As is the way with Zoom, each student’s box on screen is labelled with their name, but in this case also their pronoun of choice: she/her, he/him, they/their.  To mix things up further – at least for us – one student, plainly biologically female, is called ‘Martin’, a very pleasant and obliging person, with his setting in the background as conventional as can be.  Another is bogan ‘Matty Booiizz’, a rabid Swans fan, played by a clearly female or trans actor.  The disruptive, uncooperative student (there has to be one) is also called ‘Martin’ (he/him) whose exasperating interventions are delivered via an electronic female voice – his point being that it’s all artificial anyway…

After about half an hour of realistic and beautifully acted bickering – which moves some way from the assignment and onto personal needs both practical and psychic - the show does mark time just a little – until there is another disruptive intervention in the form of a provocative video created by ‘André’, an alienated French student.  Curiously, André’s trolling video that acts as such a catalyst, is omitted, but this show otherwise is clearly well resourced, making excellent use of the Zoom format (something that often eludes others who try to use it), the graphics are perfect, as are the interludes when the students are replaced by avatars – another distancing technique. 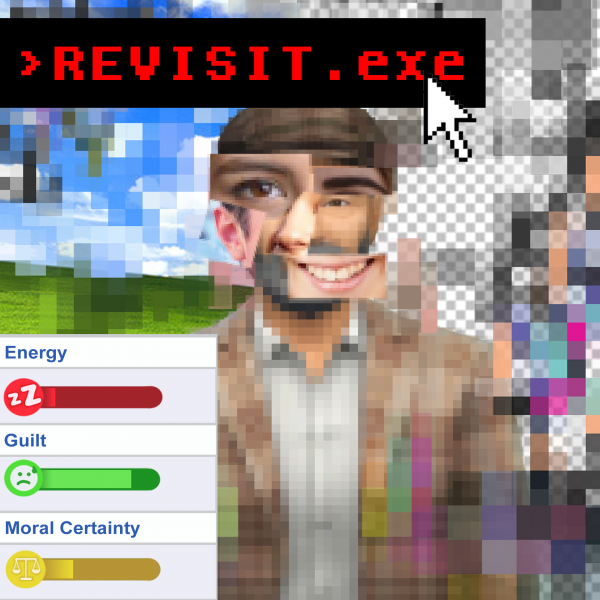 Overall, the range of the characters’ responses is entertainingly varied, ironically funny and nicely judged.  No one acts as if they’re in a comedy – but that’s what they’re in.  There is the student who wants to talk the issue to death – not the assignment issue, but the group issue.  There is the student who just wants them all to agree, one way or another (she doesn’t care, really), so she can pass this course, which she needs for another course.  But no one really wants to offend  or confront anyone – except the provocateur Martin (he/him) – so they all flounder around and the ethical issue per se gets rather short shrift.  What creates unanimity, in the end, is rebellion.

I wish I could praise these very good actors by name, but their credits flashed on and off the screen so quickly I could not make a note. Clearly, their improvisations, shaped by dramaturg Greta Doell and honed by director Marcel Dornay, make up a large proportion of the text.

It’s unfortunate that REVISIT.exe has had such a short run of only 3 days online, depriving more people from seeing it. It would I’m sure repay repeated viewings.  This intricate, intelligent, funny production may well be one of the last (there are two others in the Festival) to come out of the Monash Centre for Theatre & Performance since Monash University in its wisdom – or simply force majeure – is closing it down.

Students and their teachers from the Monash Centre are, of course, not job-ready, so fair enough, but some could be the theatre artists of the future, and the Centre has over the years given us productions that have been engaging, innovative, daring, sometimes startlingly good, other times disappointingly bad but always providing space for risk and a safe environment for failure, challenging norms and revealing and nurturing quite amazing talent.