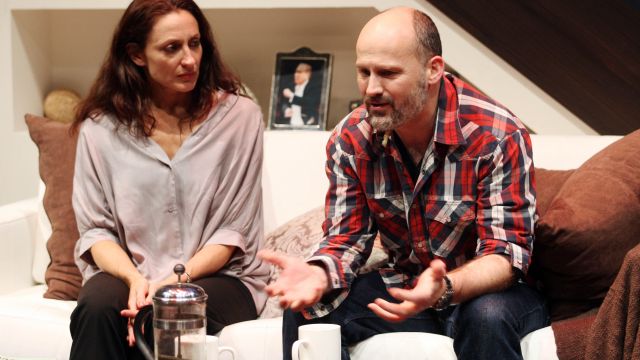 It’s a tried and true recipe for dramatic comedy. Put two people from opposite poles into a small space and watch the sparks fly. Neil Simon did it with The Odd Couple and David Williamson has succeeded with flying colours in Rhinestone Rex and Miss Monica.
In this case Monica (played by Georgie Parker) is a highly strung member of the Sydney Symphony Orchestra on injury leave and Gary, aka Rhinstone Rex (played by Glenn Hazeldine), is a retired country and western singer.
Gary is renovating Monica’s kitchen. Just as their tastes in music vary, so too they can’t agree on what to do with the kitchen.
Glenn Hazeldine gave a warmth and vitality to his role as the handyman who can’t quite get his life together. He had the most attractive part.
Georgie Parker’s role involved a transformation from a snooty musician into a sexual tigress, once she had a few drinks under her belt. I felt her character development was a little less realistic, but maybe there are musicians like that?
An excellent dramatic device throughout the play was a community radio station on which Gary hosted a program. It acted like a Shakespearean soliloquoy, allowing Rhinstone Rex to speak to the audience about matters of the heart and allowed Miss Monica to eavesdrop. The device was slightly overdone, with one broadcast too many at the end of the play, leaving the audience a little confused as to whether the show had concluded.
With a nip and tuck this will be the perfect play to tour to the bush and beyond.
David Spicer