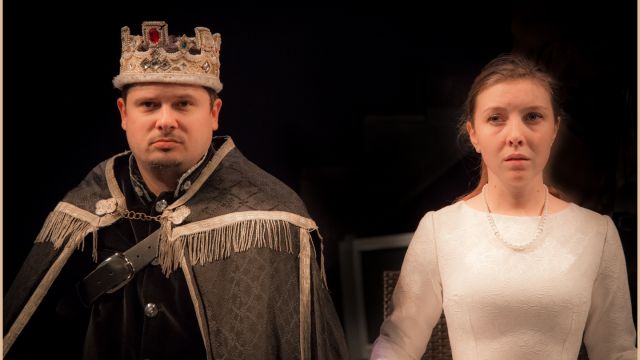 The University of Adelaide Theatre Guild’s brilliant and unconventional take on Shakespeare’s Richard III is riveting in its intensity, with the contemporary setting conveying a strong sense of alternate reality.

Scenic artist Jason Ankles’ looming graffiti wall is reminiscent of that found in the streets of civil war-torn Belfast and is the stunning backdrop to the simple set, where the only static adornments are discarded television sets. Balanced precariously as if designating the tottering state of the times, the screens portray crucial external scenes of chaos and coronation, as well as ghostly dreams.

When the play begins, Richard’s older brother Edward has been installed as king after decades of civil war between the Yorks and the Lancasters. Richard has a twisted sense of his own entitlement and harbours murderous pretensions to the throne. Megan Dansie’s inspired direction comes from the premise that in his ruthless aspirations, Richard is simply adhering to his society’s traditional rules of intrigue and violence. This sets the scene for a very complex Richard, a man embittered but not defined by his physical disability.

Bart Csorba portrays Richard sublimely, adding unexpected nuances to the character of this malevolent, manipulative killer. Menacing and self-absorbed, Richard is everywhere.  Dressed completely in black, he leers into our faces, lurks in shadows behind the audience, struts about the stage or looms above us on the mezzanine. He is a compelling embodiment of sadism, manipulation, calculated indifference and witty, yet cruel, humour. However, it is in his subtle demonstration of Richard’s growing paranoia where Csorba excels. Richard’s final realisation of the enormity of his deeds and that he should now truly be afraid of shadows is portrayed exquisitely.

This production has a strong lead cast, with several standouts. Rachel Burfield is superb in her heartbreaking portrayal of the anguished Queen Elizabeth, despairing that Richard has murdered her two sons. The scene in which Elizabeth shrinks at Richard’s lecherous touch while she absorbs his dreadful plans for her daughter is mesmerising.  Tony Busch is magnificent as Hastings but like most of the cast, he portrays other characters as well. With his marked changes in body language and accents he is the most successful of the multi-character actors in delineating his different roles. Minimal changes in facial appearance, together with the modern, but mostly ‘everyday’ costuming, do not assist the more inexperienced actors to define abrupt changes in their roles. This sometimes proves confusing for the audience. Gary George grows in intensity in his role as the amoral Duke of Buckingham and is wonderful in his portrayal of Buckingham’s final understanding that his master is a treacherous monster. Peter Davies is superb in his dual roles as Stanley and Murderer 1. Celine O‘Leary, as the Duchess of York, is the embodiment of a regal matriarch, warm and tender with her grandchildren, yet coldly despairing in the presence of Richard, the son she believes was born to make her life a living Hell.

Performances amongst the remaining cast are generally good, though vary in success. Steve Marvanek embodies Clarence, Richard’s gentle, trusting older brother. Jamie Wright successfully portrays the ailing and despondent eldest brother, King Edward 1V. Joshua Coldwell has stand-out diction in his fine portrayal of Murderer 2. Despite the character having relatively little dialogue, Alex Antoniou has unsettling stage presence as Richard’s sinister assistant, Ratcliffe, contrasting effectively against Miriam Keane’s more benign assistant, Catesby. Gina Cameron is delightful as the doomed Duke of York, while Alice Olwen portrays Lady Anne’s naivety and fear in dealing with Richard’s sadistic advances.  Samuel Rogers is a strong presence in both his roles, but is particularly fine in portraying Richmond as a good and just contrast to Richard’s evil persona. Richmond’s fight scene with Richard, choreographed by fight arranger Jaye Gordon, is compelling. Overall, the cast work well to achieve pace and continuity as they move through costume change after costume change, even effortlessly preventing a minor furniture failure on opening night.

The lighting design by Richard Parkhill successfully highlights the dark mood of the play, with actors moving on the edges of light and shadow. Bar-like shadows skilfully designate the gloomy cells of the Tower of London. Despite some minor cue lapses on opening night, the sound design by Tim Allan adds drama to the overall play experience.

This is a memorable production, dominated by Bart Csorba’s brilliant performance.