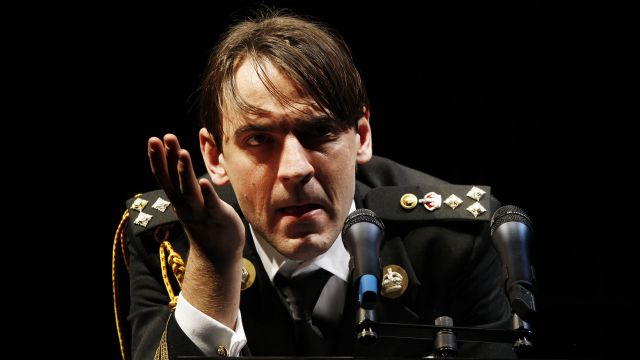 Simon Phillips commences his production of Richard III with a short segment from Henry VI. Richard enters somewhat surreptitiously, during this prologue, and ingratiates himself prior to launching into the play’s opening monologue. The character appears relaxed and confident and the actor has a chance to get the measure of his audience. So the famous soliloquy beginning: “Now is the winter of our discontent”, is spoken by a character the audience is familiar with. As audience, if initially shocked by Richard’s deformed body and unwieldy gait, we have had time to accommodate it and are now eager to hear him. Being thus introduced to Ewen Leslie’s Richard III one feels connected and engaged by an actor who can comfortably assume the mantle of this fiendishly ruthless king. Phillips’s choice ‘sets the scene’ for an excellent night of theatre.

We know him, this Richard. He is a charmer exuding sensuality, a bit slimy, a bit grubby yet attractive. As with the very charismatic, he seems like/feels like someone we have met before, someone we know. Mr Leslie’s Richard - a sometimes pathetic, sometimes childlike creature has deformities that, strangely, render him non-threatening and threatening in the same moment. Richard, empowered with acute self-knowledge has a capacity to manipulate that is deeply fascinating. Delightfully the actor playing this seductive villain wears the character like an old cloak, conveying his strength, skill and capacity to amply fill this demanding role.

This contemporised production hangs together surprisingly well. The pervading feel is of American politics in a bumper episode of West Wing. However a ‘very long bow’ needs to be drawn to satisfactorily fit the whole story into this conceit. Some suspension of disbelief is required in mixing Royalty with American Presidential power, particularly with regard to the literal murdering of brothers and nephews.

The whole moves at a seamless pace with considerable momentum aided by a revolving set, that at times, particularly when travelled through by Richard, is suggestive of a rabbit warren or some rodent’s lair. Shaun Gurton’s set is masterful in its capacity to suggest spaces through the ages.

Surprisingly one of the darkest and most sinister curses from the Shakespeare cannon is presented on a dazzling white set. Jennifer Hagen as Queen Margaret wields considerable power in presenting a very strong and intense scene driven by dark and malicious intent without atmospheric aids. By contrast the scene between Queen Elizabeth (Alison Whyte) and Richard is beautifully set around a chesterfield couch and lit in a pinkish glow that enforces the intimate nature of their communication. As one of several heightened scenes in the piece, the work of both actors is complex and gratifying in its expression of unfathomable contradictory emotional intent and behaviour.

Notably Humphrey Bower’s presence and voice exude clarity. His deceptive Buckingham is beautifully presented as a dignified ‘straight shooter’. All of the cast are uniformly strong and the production slick and smooth. Melbourne Theatre Company certainly has a right to be very proud of the Richard III team.