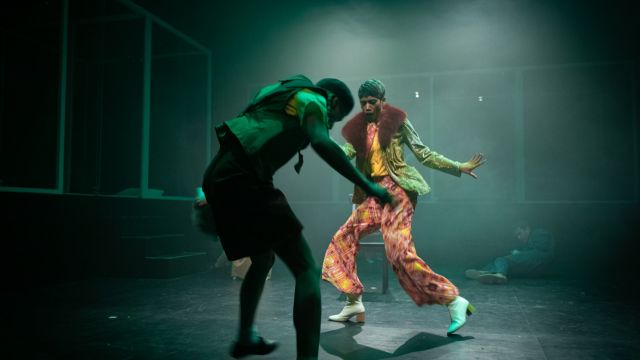 Set in 1963, the central question posed in Ring, Ring! appears to be ‘What is Truth?’  The play begins with a death – a murder? – and five representative strangers become both investigators and suspects.  The victim, who becomes an investigator herself, is a determined ‘Eagle Scout’ (Britt Ferry), but the other characters – the narcissistic Celebrity (Sharmita Siva), the dreamy Lover (Lia Stark), the anxious Counsellor (Maurice Wan) and the stolid Worker (Kaya Byrne) - are investigators and suspects too.  That appears to be to be the entirely worthwhile premise: that we seek the ‘truth’ (or pretend to) even while we are all guilty too.

I say ‘appears to’ because for three-quarters of the show the dialogue is largely incomprehensible.  Apart from poor diction and projection, the actors are vociferously talking all at once or over each other.  More seriously, they are muffled by the new conditions at Theatre Works.  The playing space at this theatre has had a radical make-over.  Gone (forever?) are the usual steep bleachers or the occasional simple configuration of lining the playing space with chairs, or even the rare ‘cabaret’ setting.  Thanks to COVID-19, I assume, and ‘social distancing’, the audience (a maximum now of only 48 people!) watches from twelve raised clear Perspex walled booths on all four sides of a necessarily bare space.  Theatre in the round force majeure.  But the Perspex walls create a baffle for any sounds coming from the stage itself.  Audibility is a major problem and will be, I would think, for any production mounted in this space.  A solution may be to mike the actors – something increasingly common elsewhere. 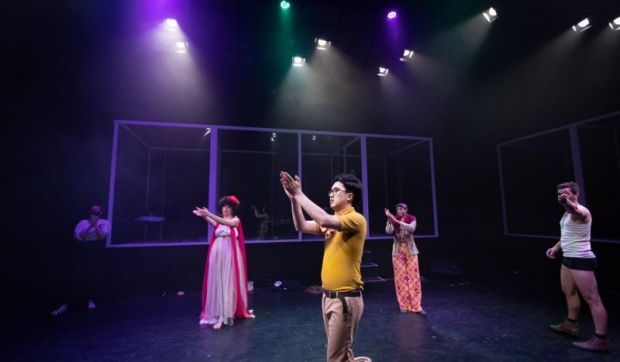 Meanwhile, I wonder whether the writer-directors, Ebony Rattle and Ellen Wiltshire, ever witnessed a rehearsal from inside one of the booths. Had they done so, they would have noticed, perhaps, that their hardworking cast cannot be understood.  This is particularly unfortunate in that Ring, Ring! is a stylised and metaphoric work that needs its words as well as its elaborately choreographed busy movements.  The directors would have also noticed that the sound design (by Alex Mraz), broadcast via speakers within the booths, exacerbates the problem – the more so in seeming arbitrary or irrelevant.

Thus, my impressions of Ring, Ring! can only be partial and quite possibly unfair.  The gist of the show becomes clearer in the final quarter when there is a pre-recorded Voice Over – during which the cast perform in dumb show – which comes from the loud-speakers and then the Eagle Scout seizes a microphone to deliver an angry monologue.  But there are, unfortunately, other problems. 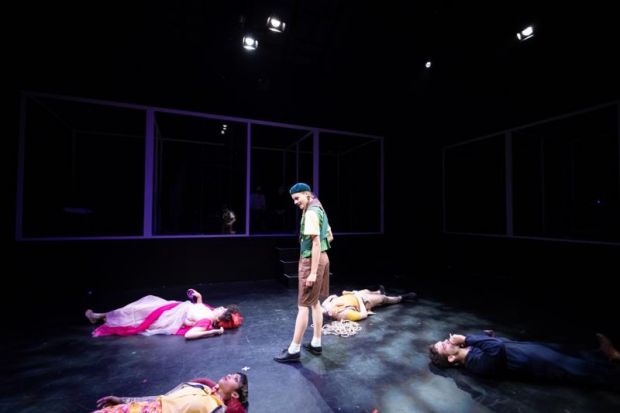 The press release tells us that Ring, Ring! was ‘developed by… a collective of women and non-binary artists who came together through the internet without ever meeting during the 2020 Coronavirus Pandemic… The show was written and developed entirely online, forcing the creative team to circumvent traditional theatre practices…’  That sounds like special pleading to me, but such a development process per se certainly could work.  Here, however, what may have happened is an absence of testing things out, seeing how they look and sound in situ.  The frenetic movements by the entire cast (except for a rather nicely executed pas de deux by Ms Siva and Mr Byrne) don’t enhance the story or its ideas because we are almost always struggling to grasp the story and the ideas.  I feel for the cast, some of whom, such as Lia Stark and Kaya Byrne, have real stage presence, but the stylised nature of the piece is at odds with their attempts to match it.  Overall, Ring, Ring! perhaps attempts to do too much: its creators, it seems, including anything that occurred to them.  The result, unfortunately, is an undisciplined lack of focus.

Outside the theatre, a poster attempts to describe Ring, Ring! for us.  ‘[It] dissects the concepts of modern humanity and how it intersects with technology and questions how we create intimacy in the digital world.’  Sadly, I am unable to say that it does any of these things, but, as noted earlier, the physical conditions make my impressions partial and perhaps unfair.