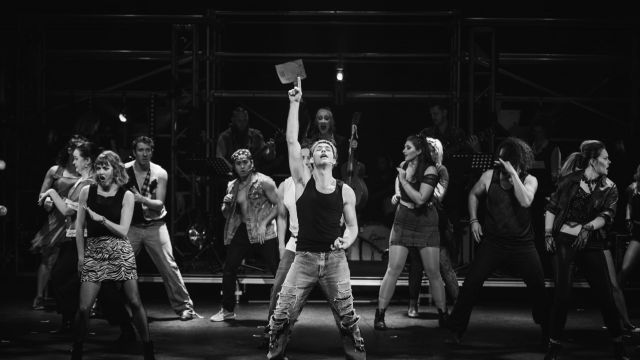 Pannic Productions burst on the local community theatre scene last year with an impressive audio-visual heavy production of Pink Floyd’s The Wall. This year they’re back bringing a lot of glam-rock to the Redcliffe Peninsula with everybody’s favourite 80s jukebox musical Rock of Ages. The show, which mines the rock-anthems of Journey, Twisted Sister, Starship, Europe and other 80s pop groups, is given a great production with state-of-the-art lighting (by the director), a group of kick-ass rock musicians, and a cast who deliver a mountain of high-decibel vocals.

The wafer-thin plot follows a Los Angeles rock-venue threatened with closure but the land developer has a change of heart and lets his son follow his dream. Mixed in with this is a boy-meets-girl story strand when a small-town girl comes to L.A. to make it big as an actress and ends up a stripper and a musician who wants to be a rock star who becomes a pizza delivery boy. Micheal Hornery was a honey as the stripper Sherrie, singing well and bringing some pathos to a generic part, while Adam Goodall, delivering on the promise he showed as Tony Manero in Saturday Night Fever, blistered the stage with his stratospheric vocals as wanna-be rock star Drew. Jesse Ainsworth made the most of bad-ass Stacee Jaxx, and scored with his duet with Hornery on “I Want to Know What Love Is”. Paul Wheeler was a raunchy narrator Lonny, Asabi Goodman sang the heart out of Justice, mother of the strip-club, and Michael Mills pulled every laugh as Franz and had his centre-stage moment with “Hit Me With Your Best Shot”.

Ashleigh Creeks and Aimee Pouzet’s costumes mirrored the period, Ashley Rae Little’s dance moves went mostly for straight lines, and James Dosser’s sound was loud. Andrew Panda Haden’s program design (making it look like a rock magazine), was clever, but his production overall took a while to pull together. Once it did however it fired like gangbusters.