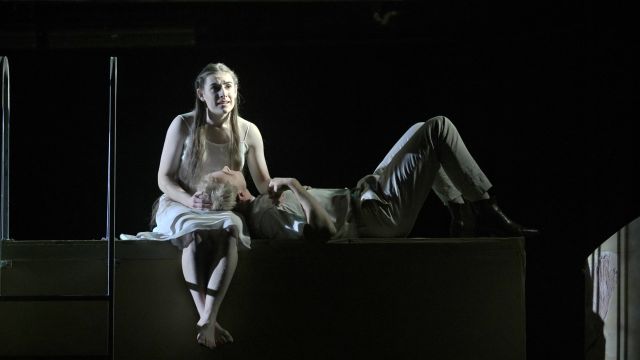 If some of his punning is overworked by modern standards, nonetheless Shakespeare can hardly be faulted in observing and showing the eternal difficulties of humans in society — an eternality that has made relatively easy the translation of his plays’ settings into other times and places.

Taking up the challenge of bringing Shakespeare’s Romeo and Juliet to the Canberra Repertory stage, directors Kelly Roberts and Christopher Zuber have modernised it in costuming and music whilst retaining its language and swordplay, and the mix works well enough for amateur dramatics.

The cast of fourteen, all audible without resort to yelling, worked well together, including quietly moving the set.

A wall on a turntable, complemented with moveable arches, produced a variety of sets, evidently representing the play’s original setting in Verona in about the 14th century. Costuming, mixed and somewhat matched, ranged from modern-day street casual to more formal creations denoting social status.

The production’s major strengths arose from genuine vision. One such was the staging itself, and another was the use of strobe-lit imaginatively choreographed slow motion in fight scenes. Used at other points, the slow-motion technique’s intent might perhaps have been clearer with other indications of time’s passage.

The soundtrack at times worked very well in quietly underlining the star-crossed lovers’ mounting tensions and at others entirely undermined a scene’s emotional intent.  By contrast, the lighting throughout was outstanding and did much to enhance various scenes’ emotional texture.

Acting over all was commendable. Of special mention were the performances by Pippin Carroll as Romeo and Annabelle Hansen as Juliet, for their individual emotional conviction; and those of Ryan Street, for the versatility he brought to his two roles, Friar Lawrence and the Prince.

Minor flaws aside, REP's Romeo and Juliet repays attention in reminding us how our very human natures may work for or against us.