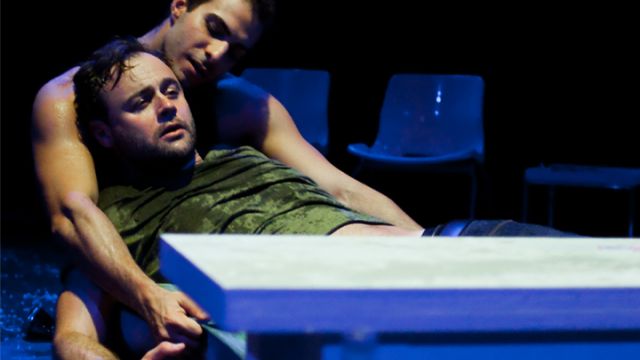 Ruben Guthrie is a modern Icarus. Alcohol is to Ruben what the sun was to Icarus: both high flyers crashed ignominiously.

It’s hard to decide who is the star of this show: Gyton Grantley for his brilliant performance? Or Brendan Cowell for his honest, vulnerable autobiographical script?

This is not a play to ‘enjoy’; rather it is to ‘live through the experience’ with one or other of the characters. We all know them: family, acquaintances, social revellers, business colleagues.

The comedy comes from the shock of recognition and can be black at times: familiar advertising jingles and clever copywriting; gen X and Y speech patterns (yes, this play targets the younger crowd, it’s their turf); and we all recognise ourselves or friends instantly. Gyton Grantley plays the whole gamut of emotions: abject self-loathing to euphoria. He gives us a charismatic young man to care about, to admire, to cheer for. A bravura performance.

Ruben is surrounded by six others, every one a fully-drawn character and beautifully portrayed: Caroline Kennison (Susan, his mother); John McNeill (Peter, his father, also an alcoholic); Hayden Spencer (reformed alcoholic Ray, his boss in Subliminal advertising company); Lauren Orrell (Zoya, pencil-thin Czech model and Ruben’s girlfriend); Kathryn Marquet (Virginia, his AA mentor and fiancée); and Darren Sabadina (Damian, a young gay friend with easy access to drugs). Yes, take note, there is some sexual versatility here too. This is not a morality play.

and to his creatives Renèe Mulder (design), Jason Glenwright (lighting), Guy Webster (composer and sound) and all others in subsidiary roles.