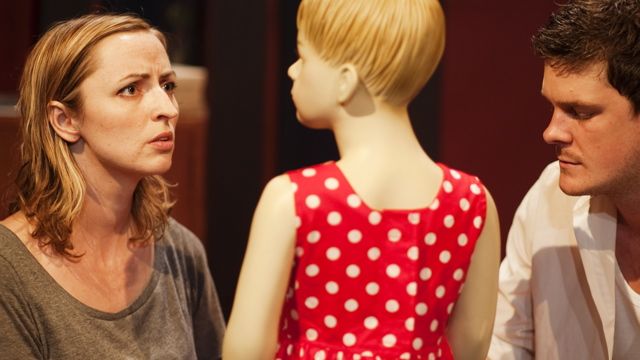 A little girl, Ruby, has disappeared on her way to visit her grandmother.
How do the parents, Sylvie and Ray, cope?
What do the neighbours know? Is one of them responsible? They’re all a bit on the weird side in Matt Cameron’s intriguing, ambiguous play.
Is there more to the action of this play than the surface scenario suggests?
Young mum Sylvie dresses and displays a mannequin, dressed as Ruby was when she disappeared, in the front yard. The mannequin, on stage throughout, as one set serves for numerous locations, is a constant presence. The multiple, various doors of Tessa Richardson’s set effectively imply a diverse neighbourhood.
The action of the play consists of one final circuit of the long-suffering neighbours, all suspicious in the parents’ minds, in a desperate bid for clues.
Sarah Aubrey and Brynn Loosemore play parents Sylvie and Ray, and their eclectic, cartoonish selection of neighbours, slipping proficiently into and out of a range of caricatures.
But are Sylvie and Ray, interviewing the neighbours yet again, as it initially seems, or is it all the elaborate role-playing of a couple striving to come to grips with their loss?
Engaging with this view of the caricatured neighbours of the script and their two dimensional portrayal in the production, a twist suggested late in the action, raised my response to the production substantially after some early doubts.
I left the play, its fringe theatre setting, and low-budget production pondering this very ambiguity on this, my first encounter with Ruby Moon.
Neil Litchfield