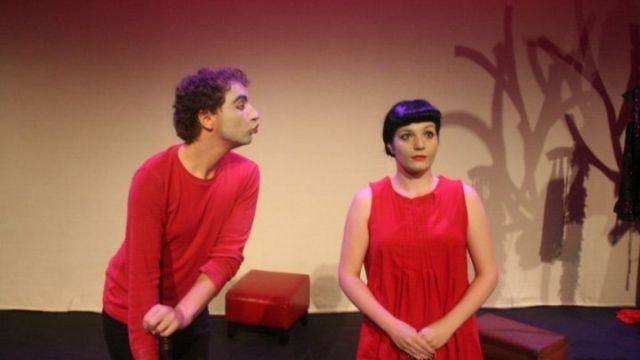 The anguish of the young wife in Ruby Moon is evident from the time her husband arrives home from work and tries to give her an affectionate kiss.
She resists, pulls away, and says “How do we do this again?”
The pair’s six-year-old daughter, the title character, disappeared several years ago while going to the other end of their cul-de-sac suburban street to visit her grandmother and they are still trying to come to terms with the loss.
Matt Cameron’s play engages, intrigues and disturbs as it shows, with a dark humour that director Kath Leahy and actors Giverny Lewis and Timothy Shearman brought out, the rituals that have become part of Sylvie and Ray Moon’s life together,.
Lewis and Shearman played all the neighbours Sylvie and Ray visit after receiving a package containing part of their daughter’s favourite doll. This doubling, written into the text, lets the couple see elements of themselves in the others: a religious woman with a pet parrot, a sadly clownish man, an amorous female singer, a bombastic retired soldier, a nervous baby sitter and a halting academic.
The doubling allowed Lewis and Shearman to show just what good actors they are, with Lewis’s withdrawn Sylvie, for example, a complete contrast to the seductive singer Veronica, and Shearman’s practical Ray very different to military man Sonny Jim, whose words and actions marked him as a human equivalent of a gun about to go off.
Ruby Moon was a hypnotic production, with the gothic glow of its lighting and the costumes with colours and patterns similar to the last dress Ruby wore, reinforcing the sad obsession of the bereaved parents.
Ken Longworth