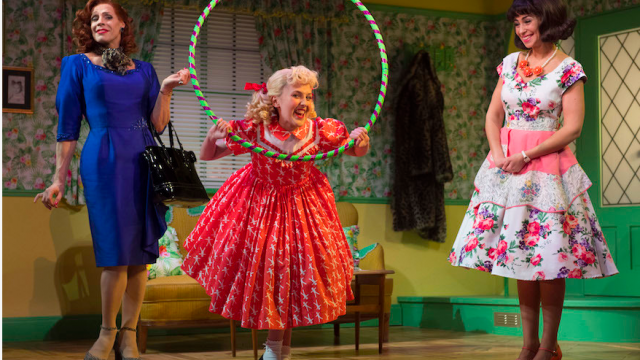 This video of Ruthless! The Musical springs from a West End production that played the Arts Theatre in 2018. Since it first opened Off-Broadway in 1992, where it won the ‘Best Off-Broadway Musical’ award from the NY Outer Critics Circle, it has become better known as the show where Natalie Portman and Britany Spears understudied the lead ingénue Tina. Laura Bell Bundy played the role and went on to Broadway glory in Legally Blonde.

The show is a monster mash-up parody of Broadway, movies and movie lore with echoes of All About Eve, The Bad Seed, Gypsy, Mame, The Omen and Whatever Happened to Baby Jane thrown in for good measure.

Tina Denmark (Anya Evans) is an eight-year-old budding Broadway star who misses out on the lead role in her high-school musical Pippi In Tahiti, being cast as the understudy. Determined to redress the situation, and her ambition fueled by her stage-crazed manager Sylvia St Croix (Jason Gardiner), Tina takes her rival Louise (Lara Denning) up into the flies of the theatre, pushes her off, and takes over the lead. Tina is sentenced to serve time at the Daisy Clover reform school.

Anya Evans is a demented Shirley Temple look-a-like with blonde curls, and a tap-dance retort for any situation. She’s dangerously talented. Tracie Bennett as the theatre critic is outrageously OTT, but then so is everybody else. It wouldn’t be as much fun it they weren’t. Jason Gardiner (a judge on the UK’s Dancing On Ice) makes a grand drag-diva of Sylvia, constantly chewing the scenery, Harriet Thorpe is delightfully waspish as Myrna, whilst Lara Denning is genuinely funny in the dual roles of Louise and Eve.

But the performance of the show is Kim Maresca as Judy, reprising the role she played in the show’s 2015 Off-Broadway revival. Kooky in the first act where she’s wearing a swing dress with flowers that match her patterned wallpaper, and delivering big-time in the second singing ‘It Will Never Be That Way Again’.

The 50s are everywhere in Morgan Large’s design ,with the first act looking like it came out of the Betty Crocker cookbook, and the second a plush Manhattan penthouse with floor to ceiling windows. Gareth Valentine’s musical direction was spot-on, as was Tim Lutkin’s lighting and Gregory Clarke’s sound.