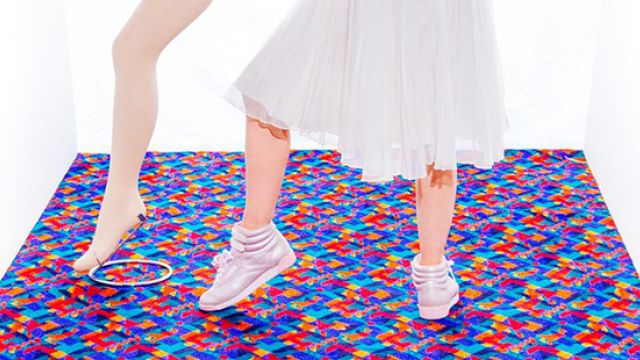 Salt is a tale of Innocence Unprotected.  Or Innocence Exploited.  It’s reminiscent of a real-life scandal briefly in the headlines not so long ago.  But Salt is no docu-drama.  Seanna van Helten jumps off from that horrible, sordid story, goes under the ‘facts’ and makes her three characters rounded if damaged individuals.  An eight-year-old girl, Caitlin (Artemis Ioannides), only child of a single mother, adores television ‘personality’ Bobby (Scott Major) host and MC of a Saturday morning kids’ singing and dancing show.  Caitlin longs to be on that show herself.  She knows the songs, she knows the moves: it’s her dream of glamour and dancing and fun... and Bobby.  And then – OMG – it happens: she’s picked, chosen, she’s on the show – with Bobby!  And then – OMG – Oh-My-God – she’s in a sit-com with Bobby, playing Bobby’s daughter.  Like it or not, she gets a controlling manager, Sam (Brigid Gallacher), who’s Bobby’s manager, but also Bobby’s real daughter as well.  Caitlin’s real mother never appears, but we figure she leaves well enough alone: she either ignores or doesn’t notice the way her daughter is sexualised, and financially she does very nicely indeed…  Then Caitlin’s thirteen and no longer the cute and naïve character she plays in the sit-com.  She’s restless and bored.  And she’s found out that the real Bobby is quite unlike the façade on which she had such a crush.

Mr Major’s Bobby is a dissatisfied man, unimpressed with his status as ‘comic actor’; he wanted to be a rock star.  He’s still nostalgic for what he believes he could have been and for the time when he could’ve been that rock star – along with the groupies, the drugs, the out-there philosophies of life.  Mr Major bravely plays Bobby with no attempt to redeem the character.  His Bobby has a paper-thin charm for the cameras, but he’s a pretty ordinary, lazy, not very bright guy who lucked in to the show business and resents riding on the back on his thirteen-year-old co-star.  Ms Gallacher’s Sam is perhaps the most conflicted of the three characters.  She suggests those conflicts with great subtlety, interpreting her character as a steely, irritable control freak – tightly controlling of herself as well - desperate for her father Bobby’s love, but who can only be with him by controlling him.  Worse, she comes to love Caitlin as well – in her own repressed way.  It’s a performance that brings out yet another variation on the parent-child theme that is at the centre of the text.  Ms Gallacher generates great tension by suggesting that her character is constantly on the edge of panic or tears.  The sadness and complexity of the character comes close to making the play ‘Sam’s story’.  Is this the reason director Penny Harpham keeps her upstage and eyes down or turned away so often?

Caitlin is, meanwhile, the simpler character in that ‘what you see is what you get’ – which in turn makes us both impatient with and fearful for her.  She is the ‘subject’, but just as much a catalyst to reveal Bobby’s inadequacies and Sam’s ambivalence and lonely inability to connect with anyone.  Ms Ioannides is brilliant as Caitlin, taking us across the time jump from eight to thirteen and beyond.  It’s a layered performance with the energy and exuberance of a kid, but underneath that there’s a disturbing if unconscious sexual subtext in her dance moves and in the faux innocence of her flirtatious, deliberately cliché sit-com character.  Ms Ioannides never let’s us forget that, despite the money and the fame, Caitlin is a child – ingratiating, selfish, touching, sulking, irrational - and at the mercy of a frustrated man and a resentful woman.

Owen Phillips’ set design is perhaps constrained by budget and the tiny La Mama Courthouse playing space, especially when it has to fulfil numerous demands: Caitlin’s home, the sit-com studio set, dressing rooms, a car and Bobby’s suburban house with pool.  It works nevertheless because the characters keep us engaged, and Amelia Lever-Davidson’s lighting – at times dramatic, at others brightly phoney (the sit-com) or deliberately flat – points up the emotions.  For me, Ms Harpham’s direction of character is great, but the import of some scenes feels fuzzy or obscured by blocking choices.  That will improve as the actors feel more secure in the space.

Salt is a play that is concerned with the way pop culture can shape unreal and impossible expectations (Bobby is as much a victim, in his way, as Caitlin), but it goes beyond that to show the consequences.  The control freak who abdicates responsibility.  The self-loathing man who can take it out on the helpless.  The kid whose father figure disappoints and then violates her.  What’s at stake is the mental health and physical integrity of a teenage girl.  In its small scale, intimate way and in its depiction of flawed and ‘ordinary’ people, the play keeps up that important tension of what will happen next.  At the end, we have a climax that is cruel and vile but inevitable and true.