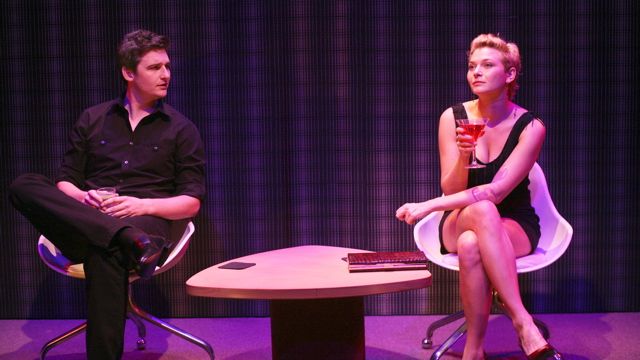 After being a successful part of last year’s Wharf 2Loud program, the Sydney Theatre Company has promoted Tommy Murphy’s Saturn’s Return to its mainstage 2009 season, and is now playing a season at Wharf 1.
Murphy’s drama captures its main character’s reactions as she stands at a major crossroad in her life. Zara is an attractive, high spirited 28 year old woman who is, at-least metaphorically speaking, experiencing her Saturn’s Return. This astrological term refers to the time when a person, approaching their thirtieth year, goes through a particularly emotional and challenging time.
In Zara’s case, she has been extending her adolescence for a very long time, and suddenly it ‘hits’ her that she can’t procrastinate any more and has to turn and face the hard choices of adulthood. Can she give up the threesomes and the drugs? Should she commit to her boyfriend Matt, and together have kids, and buy a house and get a mortgage?!
Director David Berthold’s mainstage remounting together with an updated script by the playwright makes for a sharper vision of the play.
This is Zara’s complex story, the journey of a woman, whom after years of living life with blinkers on, strives to be more in control of her life. Leeanna Walsman gives another compelling performance, reprising the role of the feisty Zara.
Toby Moore as Zara’s long-time boyfriend, Matt, and Matt Zeremes as her old school friend, Brendan, impress in the supporting roles.
Adam Gardnir’s chic and compact revolve, incorporating three discreet settings, worked effectively.
The Sydney Theatre Company’s production of Saturn’s Return plays Wharf 1 until the 30th August.