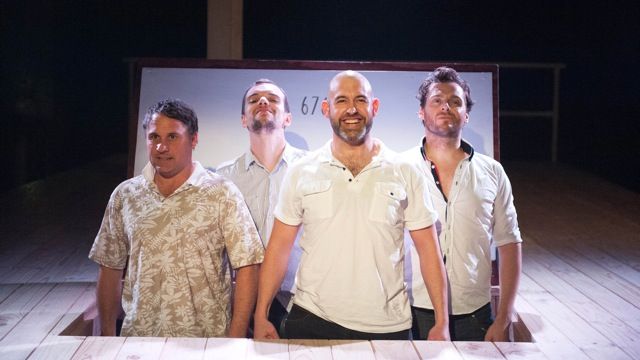 Savages is a rich, rewarding powerful theatrical investigation of the type of masculine reality, relationships and circumstances that support, what is ultimately, predatory anti-social behavior.

It is based on the Dianne Brimble case and explores events leading up to the discovery of her body in the small cabin on a P&O Cruse Ship that was occupied by the men who drugged and assaulted her.

There is a strong sense of ensemble and all actors excel in their roles working with courageous commitment to the text, that moves smoothly from the heightened poetic to simple naturalism, in an incisively complimentary staging by director Susie Dee.

The work is cleverly placed on an abstracted stylized set  (Marg Horwell) - inferring a number of environments including; underneath a bridge, a drawbridge, a ships hull, a ships deck and a disco whilst lights (Andy Turner) greatly assist in creating atmosphere.  Sound created by Kelly Ryall is used to powerful effect both naturalistically and symbolically.  It infers, cruelty, harsh alienation and, at times, expresses a dark foreboding. 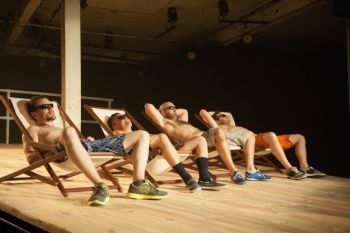 Fueled by alcohol and years of disappointing miss-communication with the ‘fair sex,’ these blokes affirm each other’s sense of failure.  They nurture a lustful misogyny through the deeply binding bond, and knowing intimacy, of the type of impaired mateship that ‘others’ women.  They are all needy and craving love but heinous and destructive in their hostile desperation.

Alienation, limited communication skills and possibly intelligence, thwarted expectations, harsh treatment of one another; dishonesty and manipulation all come into play.  In almost all cases the men lack adequate nurturing love in their lives and have some difficulties relating comfortably and appropriately to their Mothers.  They also lack basic lack skills for constructive introspection and the emotional intelligence that we are beginning to understand is so important to teach children and particularly boys at school.

Parallels can be drawn with the film The Boys in that they both explore events leading up to the actual crimes. Though this work is perhaps more probing and less terrifying than the film of The Boys by Gordon Graham and adapted by Stephen Sewell.

This timely work is engrossing theatre.