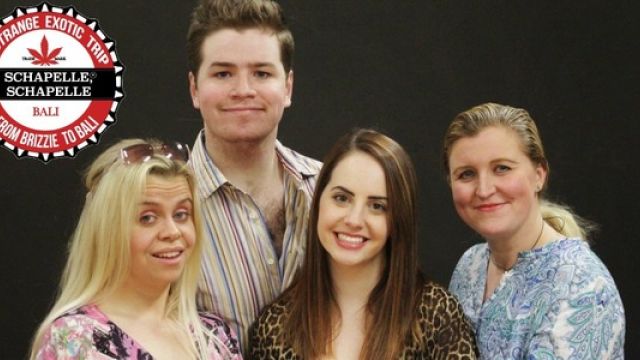 Every Aussie of a certain generation is aware of Schapelle Corby. We’ll never forget the distinctive name, the drugs charges, the Indonesian trial, the colourful family, the unscrupulous lawyers – and of course, the role that news media played in determining how we viewed all of these aspects of the case.

It’s a tale that, with the passage of time, is ripe for satirical treatment. Piano Room Productions has taken Schapelle’s saga and woven out of it an absolutely brilliant piece of high-energy, high-intelligence musical theatre, one which was this reviewer’s personal highlight of the entire 2020 Adelaide Fringe.

Kelsi Boyden brings a sparkling stage presence and excellent voice to the title role, while Ruby Teys is unforgettable and right on target as sister Mercedes.

Three roles are filled by Emily Kimpton, and she’s a knockout in each of them – as is Alice Litchfield in two.

The male roles are generally less flashy by comparison, but Jordan Gallaway, Gareth Thomson, Mitch Lourigan, and Jack Dodds all get the chance to shine in their own way.

Zoe Floyd’s costumes are as witty as the script calls for; set design by Slade Blanch is appropriately tacky when needed and greatly aids the amusingly spoofy tone. The on-stage musicians contribute brilliantly to the unique and distinctive visual and emotional feel of this show.

This remarkable team all warrant mention because their combined talents have created a gem that is both hilarious and thought-provoking.

Let’s hope for a future return Adelaide season of Schapelle, Schapelle after its too-brief Fringe exposure.