The School of Arts by Bille Brown 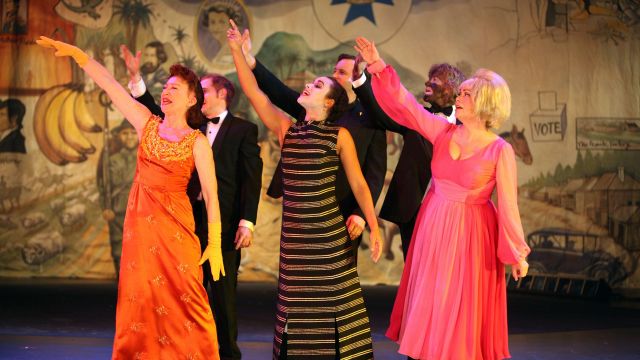 It’s hard to nail this show down: farce? murder mystery? rural cultural history?
Author and anchor actor Bille Brown chose to set the play in 1967, a year of rich pickings for a playwright. Unfortunately he chose several topics to interweave and audience members need a piece of string, a torch and a compass to find the through line of the plot.
That’s not to say it’s a dud. On the contrary it is very funny, dinkum Aussie, irreverent, and topical. I remain unsure who actually sired quarter-cast Paddy; who fired the props gun and why; whether the rich white grazier with the half-caste wife ever made the Senate; and why a spectacular Ghost-Train effect was necessary for the ‘return from the dead’ of Bronson Savage.
What came through clearly was the overwhelming support for aboriginal voting rights, and that the sixties saw the demise of Schools of Arts, which were superseded by Civic Centres.
It’s a busy and complex show for the ensemble of eleven actors: Bille Brown, Christine Amor, Leon Cain, Sophia Emberson-Bain, Andrew Legg, Peter Marshall, Sally McKenzie, Joss McWilliam, Paula Nazarski, Christopher Sommers and Ian Stenlake. Director Michael Gow and his designers and crew can take special credit for devising a show that can travel. It will bring much nostalgia to theatregoers in the tour centres.
Jay McKee