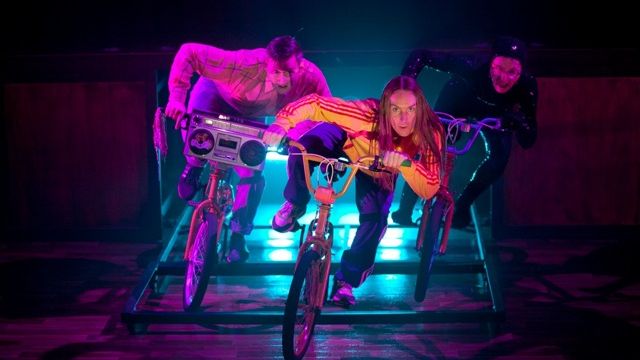 School Dance is a lot of fun; it encompasses a range of emotions, schoolyard politics, stereotypes, egos and personas that we’ve all known, been a part of, or been on the wrong side of at some stage in our lives.

The premise of this play is that three friends meet outside the school dance and as they wait to go in, they invite us into their world of hormones, angst, fear, home-life, identity and emotion. While I quite liked the play, it was fairly predictable.

The characters are three friends, all outcasts. There’s Luke, played by Luke Smiles, who doesn't speak much and when he does it’s sometimes in a wise voiceover. He comes from a dysfunctional home life of abuse and therefore physically tries to puff up his slight stature, to resemble someone tougher.

Then there’s Matt, played by Matthew Whittet. He’s the ultimate stereotypical geek; thin, awkward, wears glasses, you know the drill. He spends most of the play being ‘invisible’ - a classic cliché of teenage angst and identity – ‘I feel invisible’. Matt spends at least two thirds of the play in a shimmery black unitard that signifies his ‘invisibility’. The stand out of the three was Jonathon, played by Jonathon Oxlade. He was natural, hilarious and nuanced. The character of Jonathon is that of an endearing 14-year-old misfit. These three friends take us on their journey and along the way we come across numerous female characters, played by the strongest cast member, Amber McMahohn. McMahon is versatile, superb to watch with great physicality and energy, a great casting choice. There were some highlights; the bike-riding scene was well choreographed and visually impressive, and the closing number resembled a musical theatre finale. The choreography by Gabrielle Nankivell was cleverly crafted, clean and suited this era.

I enjoyed this play but I felt the story seemed to fall away towards the middle, then regain it’s momentum and energy towards the end.

All in all it was fun but I came out of the theatre with a fairly neutral feeling. A key component of the play is the music, which I loved and it reminded me how much I need to dust off my old 80’s vinyl! It was a great era, although sometimes daggy it was fun, edgy, naff and ‘totally awesome’ all rolled into one.