Searching for David by Steven Dawson 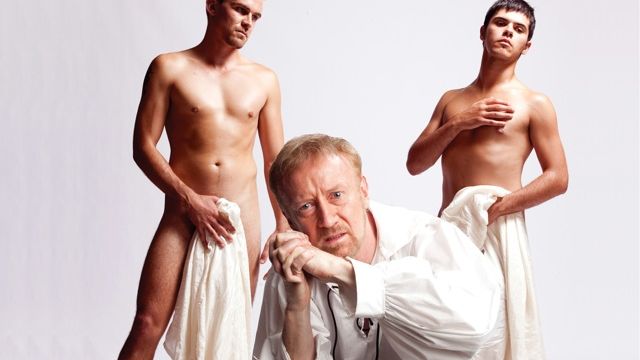 Out Cast Theatre is Australia's longest running GLBTIQ theatre company and tours nationally/internationally. The company has a long association with writer/director Steven Dawson who decided to tackle some ‘meatier’ subject matter in this production rather than his usual ‘joke-fest.’
With two thirds of the cast hailing from BAA and the National Theatre Drama School, expectation was high. Iain Murton was exemplary as Michelangelo Buonarotti and it was a pleasure to watch him handle Dawson’s well-researched script, particularly the beautifully descriptive opening soliloquy. Leon Dürr was his long-term friend and manager Bernardo, and their strong partnership on stage presented some thoroughly enjoyable theatre. There were frequent humorous moments that were very much enjoyed by the audience.
David Carroll and Antony Talia played Michelangelo’s muses/models. David unfortunately seemed to have only one gear – insolence – and his performance appeared immature next to the leads. Antony performed well but it felt as if he had less material to work with than the other characters.
Media was well utilized in the production with program music supporting the scene changes and heightening the emotion. Jenine Kerr’s paced and detailed video left us in awe of the beauty and skill behind the statue itself. David Thomson is credited with reproducing Michelangelo’s drawings so it was a pity we never actually saw any of his work.
Michelangelo was searching for more than just David within the marble and his quest cost him the one thing he wanted most – love.
Ian Nisbet