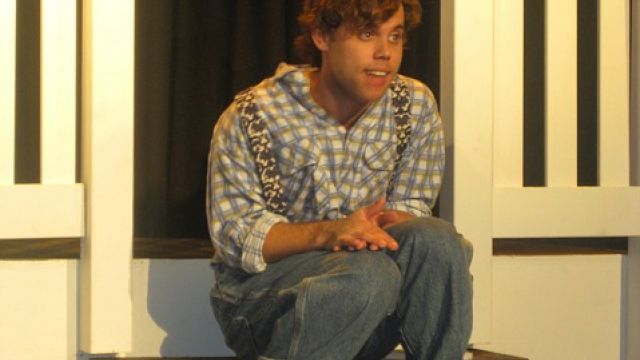 Like a Southern American accent, Second Samuel is slowly paced at first, like warm honey or a hot summer’s day, but like some other Southern tales (Steel Magnolias and To Kill a Mockingbird spring to mind) behind its gentle tale of small town life are some wonderful messages about acceptance.
Told through the eyes of the mentally challenged B Flat, in a captivating performance by Tyler Jones, we meet the folks of Second Samuel (the first Samuel was burned down), as they deal with a most unusual circumstance.
A very popular play in America’s deep South and beyond, this Pulitzer nominated script made its international premiere in Perth after playwright Pamela Parker, sent director Sue Haywood an email asking for advice on how to get her play put on in Perth. Assuming the request to be from a local struggling writer, Sue asked for a copy of the script, and discovered it was a well-known established script, which she adored. Lamenting to the playwright, that she would be unable to produce it, because she didn’t know any African American Actors, Pamela Parker immediately offered to send one.
Actor Nat Martin, who has been playing the part of US since 1987, slides beautifully into the Perth cast, working especially well with Tyler Jones. Although Nat has been playing the role for over twenty years, Sue Hayward’s gift for casting means that many of the cast seem just at home in the roles.
Ray Egan as grumpy Mr. Mozel stood out among the remaining men, but all looked ideal. Beverley Lawrence was lovely as the Beauty Shop owner with the gorgeous moniker Omaha Nebraska, while her assistant (Elizabeth Jansen) and customers including Marcela Dean (Nicole George) looked born to the roles. Nasty Jimmy Deanne was played beautifully by Breeahn Jones, whose stunning voice was used to perfection as a ray of hope for the future at the play’s close.
Simply set over three locations, with the exception of some slight incongruities, the dressing nicely evoked the era.
Second Samuel has wonderful themes of love and acceptance that remain as relevant today as they did in the late 1940s. This is a beautiful play that would be a lovely choice for theatre companies looking for something a little bit different, but still really “nice”.
Kimberley Shaw