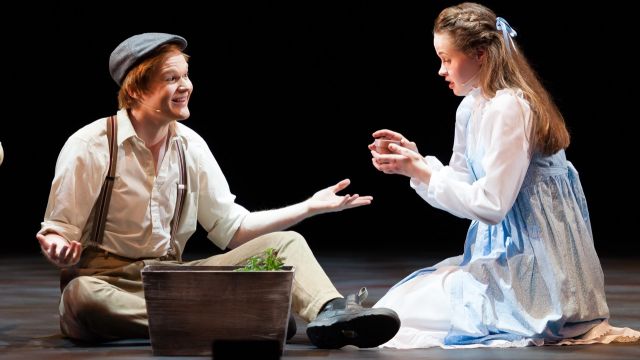 The Secret Garden, this year’s main-stage production by Griffith Musical Theatre’s graduating class was exquisite musical theatre. With fine and robust performances, striking set and costume design, and an orchestra that brought depth and subtlety to Lucy Simon’s score, it was worthy of Broadway. In actual fact I enjoyed it better than the original Broadway production because Ian Good’s direction clarified the rambling narrative and brought a warmth to the piece that I found missing in the original.

Frances Hodgson Burnett’s classic Victorian-era novel about a young girl orphaned when her parents die of cholera in India and sent to live with her embittered Uncle Archibald in Yorkshire and how she spreads a radiant light over a dark and brooding household, has been beloved for generations. Simon’s madrigal and folk-air sounding score reflects the era, whilst Marsha Norman’s book adheres faithfully, sometimes too much so, to its source, but it pays off emotionally for a happy ending when the bed-ridden Colin walks in front of his father for the first time. Ghosts of characters in the story weave in and out of the plot with ethereal grace and effectively add numbers to the musical ensemble pieces.

Shannon Sarstedt’s Mary Lennox was feisty and outgoing, and displayed genuine warmth and understanding in her pivotal scenes with Colin (Stephen Adams) who managed to elicit some sympathy from an unsympathetic priggish character. Thomas Armstrong-Robley’s Archibald captured the obsession of a man still in love with his dead wife with conviction and sang “Race You to the Top of the Morning” with feeling. His fierce tenor also shone in the duet with Kieran Rodriguez’s doctor on the soaring “Lily’s Eyes” and in the penultimate duet with Lily “How Could I Ever Know”, the score’s best and most memorable song.

As Lily, the object of his obsession, Rebecca Riley’s pristine soprano had charm and lilt, particularly apparent on “Come to my Garden”. Samuel Skuthorp brought a refreshing impish humour to Dickon, Thomas Hooley’s Ben was folksy, whilst Ashleigh Denning shone as Rose in the Act 2 Quartet. Acting performances throughout were strong, the diction clear, and the accents spot-on, especially Eliesha Anne Keeling’s dour Mrs Medlock and Cait Gregor’s below-stairs Martha. Nigel Levings’ atmospheric lighting added immeasurably to Josh McIntosh’s set of a series of hanging frames that worked perfectly suggesting the hidden garden and the maze. His crinoline costumes went for pastel colours which helped give the production an appropriate Cranford look.

Not only was the accompaniment by the Queensland Conservatorium Symphony Orchestra under Dr Peter Morris excellent, the whole production had excellence stamped all over it. As is usually the case with Griffith main-stage musicals, some roles are double-cast at some performances.