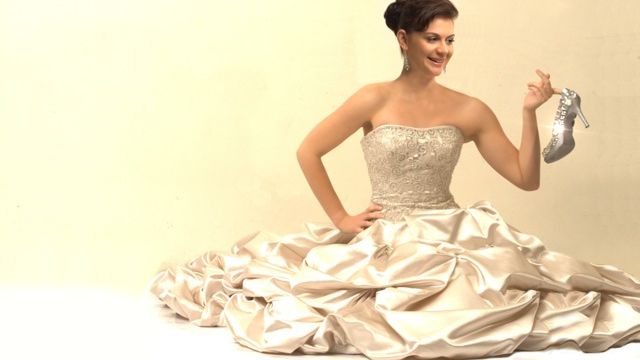 Harvest Rain have certainly lifted their game after last year’s somewhat drab holiday production of Peter Pan. Their new fast-paced version of Cinderella certainly had a lot going for it.
Top marks to designer Josh McIntosh, who delivered a simple and classy set, and some exquisite costumes – and to Jason Glenwright, with another first rate lighting design. They are a dynamic duo when it comes to complementing each other’s design elements.
Ok, so the script was a little weak, and didn’t give the actors much to work with. So to compensate most of the performances were so over-the-top they were in danger of reaching the stratosphere (e.g. Cameron Hurry as the Prince).
And the potential storyline for exploring every girl’s fairy tale dream of acquiring the perfect Manolo Blahnik or Jimmy Choo was never explored.
Belinda Heit as the obligatory Fairy Godmother was hilarious, garnering the majority of the real laughs as she popped up throughout the piece, like some pseudo-70s-soul diva, with a touch of Barbra Streisand thrown in for good measure.
There were also some genuinely tender moments between Cinderella (Katherine Marquet) and the Prince’s extremely charming Steward (Matthew Walsh).
However, the magic of Panto is also somewhat missing here without a score of familiar songs and a traditional Dame - i.e. a man playing the stepmother or ‘ugly’ stepsister roles.
Harvest Rain need to decide what sort of audience this type of holiday fare is aimed at, because at the moment promoting it as family entertainment, means neither adults or children are really catered for.
Paul Dellit