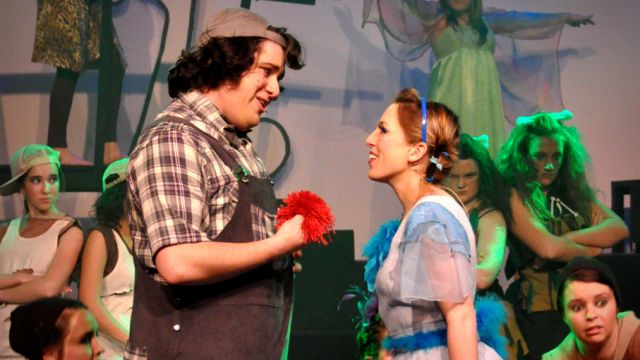 Seussical is an ideal choice for Stage Artz’s blend of performers, from young adults to tiny tots (as Stage Artz clearly recognizes, this being their second production of the musical in five years). It is particularly pleasing, however, that rather than constantly crowding the stage with kids like a dance school concert, the ballet is generally well integrated into the whole, with the littlies especially delightful among the fish and bubbles in It’s Possible.

Stage Artz founder Samantha Neaves has directed a bright, high energy production, which moves at a lively pace, also punched along effectively from the stage by Chris Jackson’s energetic, outgoing Cat in the Hat.

I wasn’t sure, though why certain songs and scenes gravitated toward the back of the stage.

The supporting ‘Bird Girls’ are slinky, cheeky and knowing, while the routines of the two ‘Things,’ who control much of the prop movement, add a mischievous edge.

Harmony Lovegrove, who played the pivotal child role of JoJo on the night I attended, is a born performer who confidently effervesces her way through a demanding performance.

Natalie Neary’s choreography for the ensemble is lively, effective and confidently performed, while entries for the Stage Artz students fitted nicely into the storytelling. Occasional nervous moments for a couple of the tiny tots, and their anxious shared glances, tended to charm rather than alarm.

The sound mix was pleasing, with Alex Ash’s impressive orchestra in the theatre’s covered pit, though a couple of performers need to learn that amplification is no substitute for diction.

Hopefully teething problems with follow spot cues will be sorted out early in the season.

Seussical is bright entertainment, with the added bonus that you’re supporting a good cause.