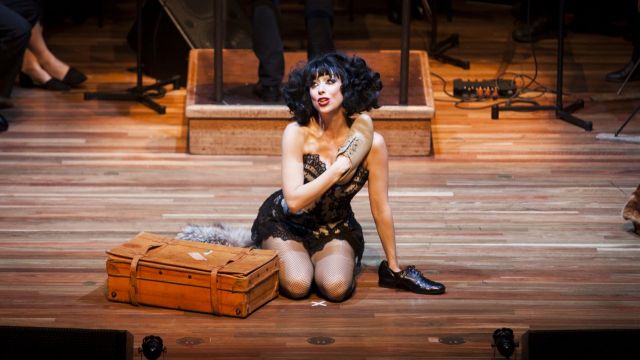 Seven Deadly Sins was the last collaboration between Kurt Weill and Bertolt Brecht, after they escaped Germany. It was written following a commission from a wealthy Englishman whose wife was a ballerina and looked similar to Weill’s wife, Lotte Lenya. So the operetta was written featuring a set of twins, both called Anna, one a dancer and the other a singer.

This production featured Meow Meow, Australian born and trained international cabaret artist, who combined both roles, and referred to the other Anna as her alter ego. It was a triumph. She could sing, she could dance, and she totally immersed herself in the role.

In this concert performance, sung in German, she performed in front of the orchestra with various tables and props, at one stage squeezing into a suitcase, which was required for the traveling twins. At the back a male quartet dressed as her family provided the Greek Chorus. 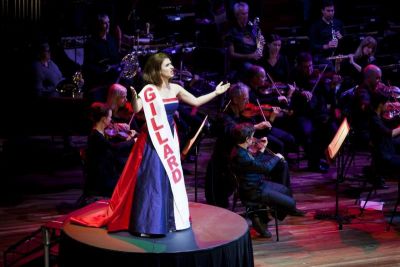 The first half featured a world premiere of a work with the same title, but composed by four up-and-coming local composers, featuring the VO Young Artists. Each of the Australian capital cities was allocated a “Sin” and a short scene depicting that. Some worked better than others.

The most memorable was Pride, featuring Canberra and four recent Prime Ministers. Using many quotes from the featured characters, they were fresh in people’s memory and most amusing. Some of the other scenes were of questionable taste.

The music was approachable, though quite difficult for the singers, but they coped with ease. Some of the lyrics were rather contrived, straining for a rhyme. Since it was sung in English with microphones, the sur-titles were hardly necessary. The costumes were based on the colours of the Australian flag and contributed to a striking presentation.

The young artists were all impressive and it was a fitting culmination of their studies.