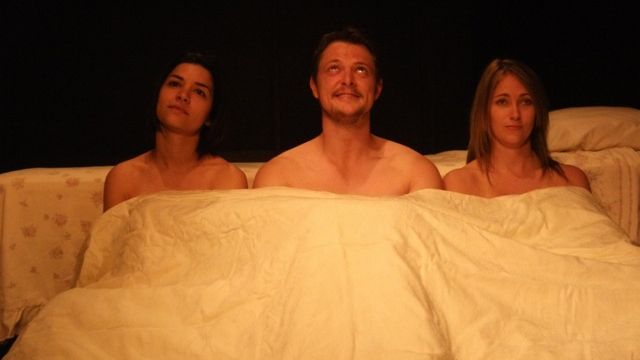 If you come to this play expecting an orgasm of titillation – a non-stop parade of actors humping onstage  – you’ll be disappointed.

What you get is a sophisticated comedy that provides a snapshot of the attitudes of 1970s youth toward sex roles.

Danny and Deborah’s relationship is complicated by homosexual undertones. Danny struggles with closeted desires, and Joan (Mandahla Rose), Deborah’s flatmate, is threatened by their relationship. Mamet’s writing is layered, earlier references repeated to build the humor. It’s also full of one-liners that prompt nervous laughter as the audience remembers their own embarrassing pick-up lines.

The consistently reliable Hjálmer Svenna stands out as the unlikeable misogynist. He’s chosen another role where you love to hate him.

It’s the first time out of the stable for director Jesse Butler, last seen acting in Innocence, and he’s made a good choice to start with. Solidly paced, the play ends with the audience wanting more.

So while it’s a snapshot of sex roles in the 1970s, Sexual Perversity leaves you wondering if we’ve really made any progress.