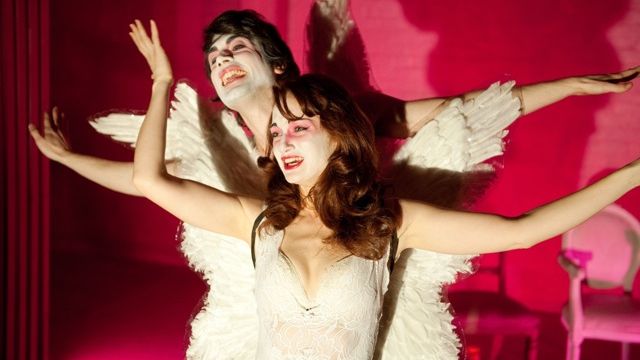 sex.violence.blood.gore is an unexpectedly fascinating political satire.   However it must be said that without historical knowledge and experience of Singapore, its messages can be a little cryptic and confusing at times.  Regardless, it is an engaging, absorbing, often highly amusing work beautifully presented by gifted, articulate, eloquent actors playing with restraint and irony.

Due to the title, and the discussion in The Age of the author being inspired by Marquis de Sade and Foucault, I was expecting a jarring and disturbing piece of theatre, with provocative aspects of ‘Theatre of Cruelty.’  However the visceral implications of the title are more often realized through dialogue than action. 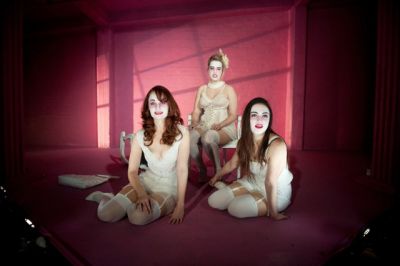 On a set (designed by Eugyeene Teh) inferring ageless civilization - with make-shift Grecian columns supporting an arch decorated by an extravagant freeze of torsos, limbs and body parts, behind gauzy curtains performers, dressed in undergarments, wait as though in a bordello, for their turn to be on stage.

Costumed throughout in exquisite, extravagant and redolent undergarments, designed by Eugyeene Teh and made by Tessa Leigh Wolffenbuttel Pitt, five females and one male actor, all in stylized ‘oriental’ make-up, present a number confronting scenes of various degrees of nihilism.

For me there was a twinge of – ‘is this cultural exchange or appropriation?’  Perhaps for this fabulous adventurous theatre company such concerns would appear petti and ‘old hat’.  And ultimately it is liberating and refreshing to watch theatre that questions notions of the ‘politically correct' with sharp and subtle acumen.