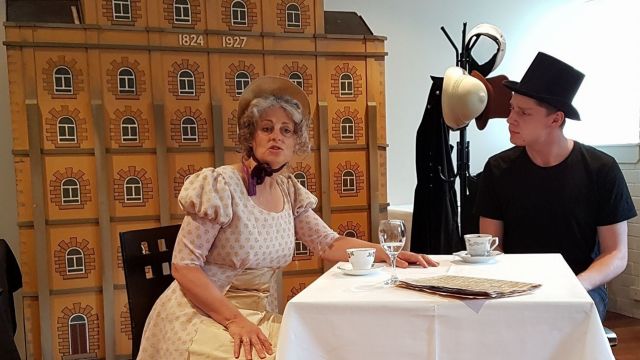 Theatre takes many forms, and appears in many different venues. Historical play In the Shadow is performed in a brewery. Written, directed and performed by Anne Blythe- Cooper, In the Shadow is a short but powerful piece about a colonial identity, Peter Degraves. The Cascade Brewery and the Theatre Royal in Hobart are two of his better known edifices. His wife Sophia was in his shadow, but is really the subject of the play.

The play is a tourism venture, a powerful way to paint a picture of the life and times of the famous man. Peter Degraves’ wife Sophia, who had twenty pregnancies, with children who survived but many losses and great tragedy in her life, was the strength behind it all. 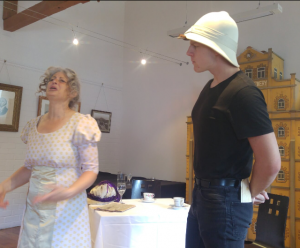 The lady of the house, Sophia, introduces the audience to the individuals who shaped her destiny, and welcomes us and the characters to her dining table. Multiple roles are played by Anne’s son James −whose powerful voice, stagecraft and adaptability belies his youth. At only 18 years, James is destined for big things. With a striking presence on stage, Jamesintroduces an array of characters.  The small theatre room is ideal and not ideal at the same time, due to the slight echo and the flat light. Accomplished actors make such tiny negatives disappear. This is a tightly crafted, emotionally charged piece of theatre - the two actors waste no time in telling the story, drawing us into the emotion.

The audience is cleverly informed, by narrative developed through dialogue, without any feeling of being instructed as to history or the times or how to feel about the characters. Anne’s portrayal of Sophia is so finely drawn, delicate yet strong, that the audience is drawn into and buffeted by her story. Anne’s beautiful words in song, with music by Louella Jury, are a welcome relief to the pace and emotion. This creative imagining is a fabulous introduction to history of the local area, against a backdrop of the colony, the world and politics and events of the times. Blub warning – bring a tissue, an open mind, and a love of history and theatre.