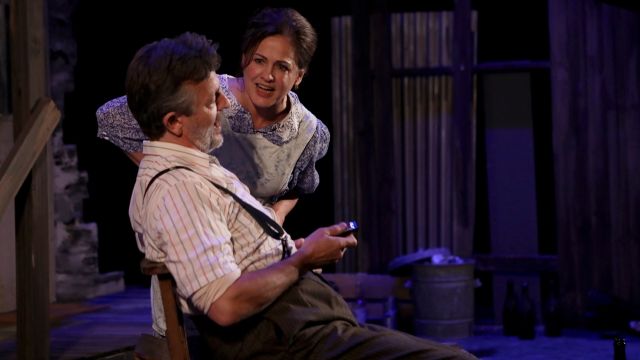 Written in 1956, and first produced by The Elizabethan Theatre Trust in 1957, this one of the first plays that explored the effect of racism and discrimination in Australia following the arrival of European refugees and migrants after the Second World War. So relevant was its message, that it was produced in the West End in London in 1959, was recorded as an ABC radio play in 1962, and was adapted for television by the ABC in 1968.

It tells the story of the Bianchi family, who have moved to Melbourne from Italy. Maria, their daughter, has married Clarrie, an Australian whose father was killed in the war. Gino, their twenty-one-year-old son has become “naturalised” and regards himself as an Australian.

The discrimination they face seems mild by today’s standards, but sixty years ago it was effectively hurtful. A neighbour constantly throws rubbish over the fence. The local storekeeper calls them Momma Macaroni and Poppa Spaghetti. Clarrie refuses to make Gino a partner in his scrap metal business because an Italian name on his truck might lose business. Gino loves to dance but the local dance hall proprietors have decided to prohibit entry to “New Australians”. 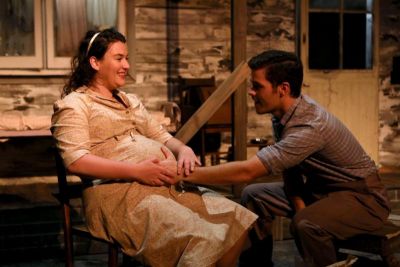 Despite this, the Bianchis keep striving for acceptance, buoyed by the friendship of one neighbour, Leila Pratt, and the grandchild that Maria is expecting.

Director Kim Hardwick makes no attempt to set this production anywhere but Australia in the 1950s. And somehow this makes its contemporary message even more palpably clear. Things haven’t changed! “Plus ça change, plus c'est la même chose"—"the more things change, the more they stay the same”.

The setting, cleverly re-imagined by Isobel Hudson, and atmospherically lit by Martin Kinnane, is the back verandah of a typical old, two-storey, inner-city weatherboard house. The paint is peeling. The verandah is propped up with timber stays. Garbage overflows from the bin, which Poppa Bianchi has forgotten to put out for collection. A dead fish wrapped in paper has been thrown over the fence by the woman next door. An old bedstead acts as a couch on the verandah. The fence on Mrs Pratt’s side is dilapidated. On the other side, it has been repaired and re-inforced.

In fact, it is exactly as described by Richard Beynon in his original stage directions. Once again, congratulations to Hardwick and Hudson for getting it right! 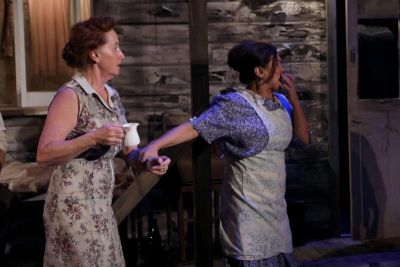 Tony Poli and Dina Panozzo are convincingly and lovably real as Poppa and Momma Bianchi. They mix accented English with rapid Italian phrases and endearments in a way that is as natural as their gestures and expressive faces. Their reactions are believably emotional, their affection and concern for their children believably strong.

Panozzo’s tiny stature emphasises the inner strength and tenacity of the character, and the volatility of her nature. Her Momma Bianchi is a small whirlwind of changing emotions and sensitive compassion, which radiate to the audience in tangible waves.

Poli too, finds the different dimensions Beynon has written into Poppa Bianchi. The loving father, the irascible Italian temper, the tender sense of fun, the harrowing depths of despair … and the determination to stay in his new home despite the heart-breaking results that discrimination brings to the family.

Both actors reveal all these emotions strongly, and the effect upon the audience is profound.

Di Smith returns to the stage in yet another interesting role as Leila Pratt, the token caring and accepting Aussie battler who restores some hope for the future. Smith’s Mrs Pratt is down-to-earth, understanding, solid, despite the sometime domestic violence she faces herself – once again, “the more things stay the same”. She reaches out to her New Australian neighbours with sensible advice and practical support. 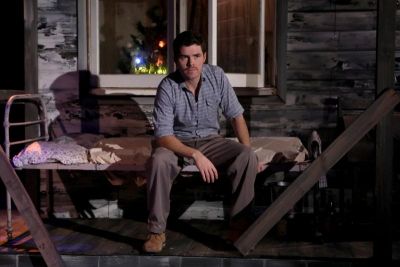 Clarrie Fowler is played by Lucas Lineham, who brings diffidence and reserve to the role of a young husband, brought up by a war widowed mother, who resents the Germans who killed her husband and refuses to meet his new in-laws. Lineham portrays Clarrie’s post-war Aussie male’s reticence and emotional inhibition with tight awkwardness.

This compares greatly with Maria, his wife, played with bubbling bitterness by Ariadne Sgouros. Having miscarried twice, Maria is heavily pregnant for the third time. She is concerned that her child will face the same kind of racism. She is concerned for her brother, knowing he is facing constant discrimination as he tries to fit into the young local scene. She resents the attitude of her mother-in-law – and the fact that Clarrie will take on Gino as an employee, but not a partner. Sgouros portrays all of this in a contained, rigidly controlled performance that intensifies her passion and cynicism.

Hardwick’s direction of this very competent cast makes this vignette of Australian life in the 1950s both credible and compassionate. By reaching into the past so convincingly, they almost make it the present.