Shirley Gnome - Taking it up the Notch 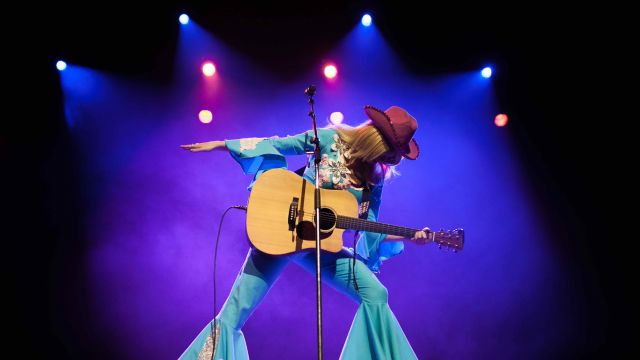 Arriving on stage in a frilled, sequined and bedazzled country-singer-manqué creation, complete with sequined hat, Canadian cabaret comedian Shirley Gnome captured her audience in a heartbeat opening with a song about, well, taking things up the notch.

She breathlessly shared the news about her recent signing to the largest independent record label in Canada, vowing to spend the advance by coming to Australia, before the record label “realised what it was they had bought”.

What they have is a comedic gem.  Shirley Gnome is a superlative musician and singer, and her incredibly catchy original songs are, as promised, “obscenely honest”, or as she blithely informed us, “mostly about fucking”.  I decided on “cheerfully filthy” as she sang songs about sex and human nature, including an ode to a neighbour’s yappy little dog that “didn’t ask to be born, but is certainly asking to die”, and the joys of a boyfriend made entirely of pillows while on tour.  There is a certain “aw, shucks” element to the delivery of her material which allows the sharpness of her wit to hit home just that little bit more keenly.

Shirley Gnome took things up a notch in the second half, which involved a sudden conversion to the spiritual, a nun’s habit, a burning bush, and the recitation of the naughty verses from the Bible (verbatim).