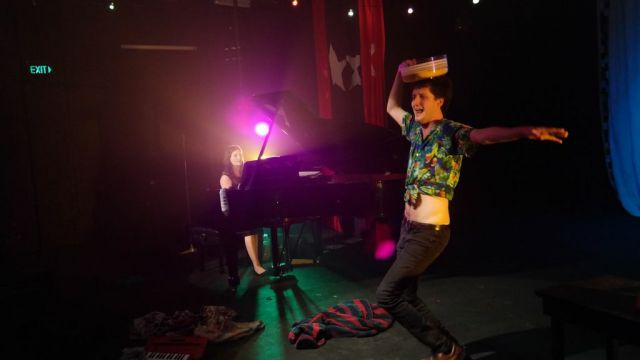 Strictly speaking, I can’t call everything that was on display at week one of Short+Sweet Cabaret as Cabaret. Mostly Cabaret yes, but peppered with a mix of performances ranging from a four-hander in rhyming verse with music sending up AFL 'WAGS' (wives and girlfriends), which perhaps belongs more in the main Short+Sweet program, to something quite freakily sideshow alley in style, to an act which was a bit too much of a lecture, before the evening was capped by a delicious Wild West burlesque which suggests there’s room for a whole new Short+Sweet Burlesque genre.

A few nights earlier I’d seen more short form Cabaret, the Sydney heat of the International Cabaret Contest, where the emphasis was more on conventional solo cabaret performances, and in fact two of the performers including one of the contest finalists, crossed over between the two events. While the standard wasn’t as universally high at Short+Sweet Cabaret, there were several outstanding items, while the showcase opportunity for performers with less fully-formed acts to strut their stuff and try it on an audience is one of this festival’s biggest pluses.

On the solo front, Brendan Hay’s persona as the playboy son of Cruella de Vil is quite extraordinary in Dance With De Vil, his integration of an iPad is great fun, and the texture brought to his performance by a moving rendition of ‘All the Things You Are’ asserts his versatility. He’s also a finalist in the International Cabaret contest, and I can’t wait to see his full show, complete with dancers. Narelle Yeo’s N’Adele – She’s Not Adele combines excellent writing, terrific singing, some delicious comedy and the joy of instant recognition in a piece which got the second half of the evening off to a tremendous start combining wit, truth, and great entertainment value.

Maryann Wright has themed her performance around characters (from musical theatre from what we’ve seen) who are Nuts. Another artist I’d seen at the Cabaret contest, she really knows how to deliver and nuance a Broadway character song, but given an extra couple of minutes in this second short-form Cabaret event, she found a broader texture too, with her delightful shift of style rendering of ‘If I Only Had a Brain’.

Kelly Young has wisely chosen cabaret staples for that well trodden theme of divorce and dating in Oh, My Shattered Illusions, and delivers them impressively.

Alison Eaton’s My Jesus Year has the feeling of being an extract from a well-formed cabaret show with good song choices, capably delivered with a mix of wit and warmth. Josipa Draisma is also very engaging in Keep Moving, making great song choices for herself, and delivering them impressively.

Double and triple acts also provide significant evening highlights at the end of each half of the night.

In the brother / sister item Harry + Liv, Charlotte and Evan Kerr create ten delightful minutes of sibling showbiz rivalry and revelry, complete with wonderful antics around the piano. It's full of heart and pizzaz.

Burlesque isn’t dead if Renee Hayes, Sophie Cook and Manik Jones have anything to do with it. Their wild west burlesque The Good The Bad and The Fugly is classic in its genre form, mixing comedy and striptease.

Furthest from cabaret for me? Marlena Rosenthal's Date with Dali (I ended up having to avert my eyes as she plunged nails up her nose). Real shock factor for me I’m afraid, and more sideshow than cabaret. She walks on glass too. That said, she’s a convincing and entertaining exponent. Jade Yeong’s Wok Off Where You Came From feels too much like a lecture, and I just couldn't get past the writing as an issue. Likewise the writing let down the send-up of AFL 'WAGS' (wives and girlfriends); the rhyming verse form and alternating lines became repetitive, while, sadly one voice in this four-hander was repeatedly flat in combo singing.

Bali Padda has a catching comedy concept in Token Brown Guy, and his dream of being cast in a popular soapie. Comedy is his forte, though, and singing the weakness of the item.

Cienda McNamara's casting envy of Nicole Kidman is fun, and she has nice comic timing, a well-formed persona, and has chosen a well-matched concept, though even at ten minutes the gag seemed to have exceeded its limits. I think its potential is as a shorter sketch in a more diverse show.

In the end, writing and song selection is just as important as performance talent. Even more so if you’re rewriting a master, for instance Sondheim; two versions of the same Broadway classic in close succession highlighted the folly of singing less masterful rewrites.