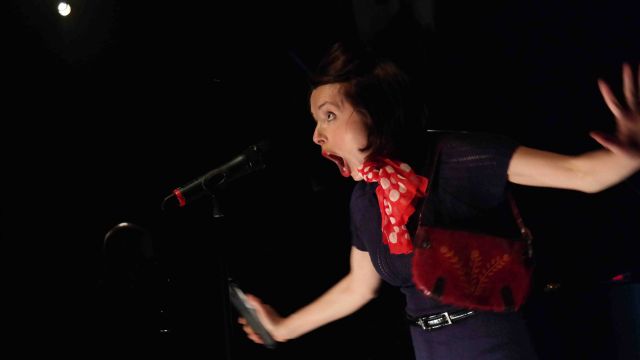 Week 2 of Short+Sweet Cabaret gets off to a flyer with vivacious Sarah Knight’s delicious comic singing and storytelling in Nasal Citric Oxide Response to Humming, a sassy offbeat look at anger management, with passive aggressive behaviour being the ultimate solution. Anyone can relate to the everyday causes of her very human anger, as her comical cure takes the response to extreme theatrical heights.

Ten minutes of sustained fun is a great opening to an evening, where the line-up of talent to my thinking outdoes the enjoyable and talet-laden first week of this competition. If planning your own funeral seems like an odd choice for a cabaret, think again. Anne Wilson’s engaging personality and delivery make The Big Farewell Party a hoot, even for someone recently bereaved like myself. And when she launches into a mega-mix of funeral music clichés, the piece takes flight, and Wilson finds the scope to really display her vocal versatility.

Like a couple of entries last week, Kate Walder’s astronaut clown sketch Lost in Space seems a bit on the outer limits of the event for mine. Perhaps there’s a need for a Short+Sweet Comedy or Stand-up genre. Quirkily entertaining in its own way, it does feel a bit of an alien in a world of cabaret.

In Lockout, Emma Marie Davis is an usher for a long-running musical. Entering through the audience she draws us in with a delightful song about the life of an usher, before delivering her own rendition of the opening of a show for a late patron during a seven-minute lockout. Davis is a charming singing storyteller and her material allows her to shape a warm, engaging character. I can think of one or two big productions where I would happily have been locked out, enjoying a performance by Emma Marie Davis. It’s time to re-launch the Legends series of cabarets which were a signature of the sadly missed Tilbury cabaret; established musical theatre performer Meredith O’Reilly has one heck of a true career story to tell, and I’m betting she’s just one of many who could be part of a new series of bio-cabarets. In Curtains O’Reilly recounts the musicals which she was cast in which ‘stopped, flopped or never got off the ground’ – the Geraldine Turner Gypsy that never happened; the dreadful Melbourne Chess where the cast received their notice on opening night; The Sound of Music which was postponed and postponed until she was pregnant and unavailable; Jekyll and Hyde, cancelled when she was on her way to day one of rehearsals, and most recently The Addams Family. O’Reilly is a terrific raconteur, and belts out a succession of the relevant showtunes in grand style. Curtains is just crying out for an expanded version.

In sultry Lady Cool’s Conversations with My Shrink, the chanteuse sings and chats about her addiction to love. Lady Cool is an alluring classic vamp with a simmering vocal delivery, whose smart song choices ranging from seductive torch to a comic number about having a crush on Ian Thorpe balance each other nicely.

Opening act 2, Carmen Lysiak’s eccentric singing Alien is an extremely quirky, original cabaret idea, with a mix of movement, comedy and self-accompanied song, but though its off-beat zaniness starts well, after ten minutes it feels like it’s all been a bit too much on one level. A little more texture in the writing and music would really boost this performance. Rachel Thompson’s Choose Your Own Cabaret concept appeals, supposedly allowing the audience to choose her songs / theme, but because we're only given two options, and she’s spent the first minute or so steering us away from one, I can’t guarantee that the conceit is genuine. But when Thompson launches into a joyous comic patter song about shopping, following it with a genuine big sing, displaying her versatility, the remaining nine minutes showcase a terrific talent.

For a second week, Short+Sweet Cabaret has delved briefly into Burlesque, this time with Irene Nicola’s contemporary burlesque piece A Bit of a Post-modern Striptease, where Nicola reveals versatility with her comic striptease, dry comic style and her talents as a self-accompanied singer. It’s a highly original take, engagingly and entertainingly delivered. In I’m Old Fashioned, accompanying herself at the piano, Mara Davis begins and ends by revisiting a timeless cabaret format, the simple eloquent interpretation of classic songs, delivering the Irving Berlin title song of her act and ‘The Land Where the Good Songs Go’ with style, affection and excellent phrasing. Displaying her contemporary and comic range, she separates the Kern songs with Andrew Byrne’s cabaret pastiche, ‘A Contemporary Musical Theatre Song’. I look forward to a full Kern songbook show, or, for that matter, a varied repertoire evening of cabaret from this talented young artist.

Crossing over from the world of opera, Kannen Breen and Jacqui Dark deliver a compellingly grotesque duo act Strange Bedfellows, a bizarre piece with sexually ambiguous resonances of Weimar cabaret and Brecht, blended with vaudeville, capped by an unconventional competition song (a sort of weird Brechtian variation on ‘Anything You can Do’), as they explore their identical taste in lovers. Great fun as these two terrific performers switch genres and more. Tom Albert and Sam Valentine deliver their own brand of political revue with Dirty Sexy Politics. These guys are talented multi-instrumentalists with good comic timing, and a touch of burlesque. Are they the logical successors to the Wharf Revue team? Only time will tell.

Short form cabaret is all the go this week in Sydney, with this program playing to Saturday, followed by a Gala final on Sunday, while the Your Theatrics International Cabaret Contest has its final at The Basement on Friday. Do yourself a favour and see some.