Simon Gallaher’s The Pirates of Penzance 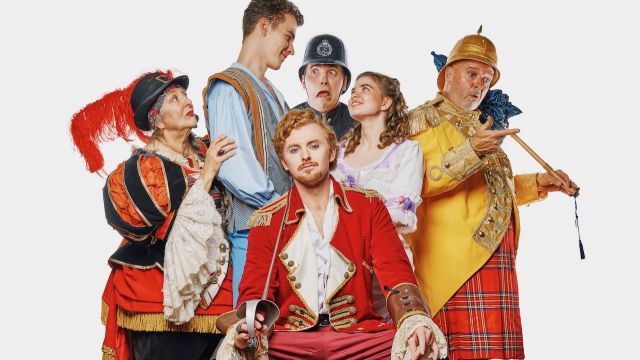 Gilbert and Sullivan have often been called the fathers of musical comedy, so it’s good to return every now and then to their body of work to experience where it all began. Long before Stephen Sondheim came on the scene, Gilbert was the master of wordsmithery, and coupled with Sullivan’s easy-to-remember melodies, they created a genre that we all know and love and is still relevant today.

Simon Gallaher first put this contemporary spin on The Pirates of Penzance in 1994 when it played QPAC, and since then his irreverent, tongue-in-cheek version has been performed countless times around the country. Yesterday Ipswich Musical Theatre cranked up the OTT performances, played it like a panto (but a well-sung panto), and sang Sullivan’s hearty score like it was newly-minted. Gallaher, like he did with the same company’s Wicked, cast the show well, with actors who could sing the roles and play comedy. Blue-eyed and limber, Thomas Armstrong-Robley did double duty directing the show and playing the Pirate King. He did both extremely well. Since we last saw him as the Phantom in Phantom of the Opera at Redcliffe back in 2013, he’s been honing his craft in Europe, and has he learned some tricks; how to play an audience, how to work an audience and how to get laughs. His exposing his left breast was a wonderful gimmick that he worked constantly to great audience delight. It was a clever, witty performance.

Likewise William Toft as Frederic, the apprentice pirate. His fine tenor filled the centre on ‘How Beautifully Blue the Sky,’ in his duet with Mabel, Melissa Bird. Bird’s recent switch to musical theatre from classical music is a plus for the genre, with her bell-like soprano doing justice to ‘Poor Wandering One’ and ‘Oh, Dry the Glistening Tear’. Adrian Carr. dressed in a kilt and occasionally using brogue for comic effect, was a marvelously pompous Modern Major General, whose patter lyrics had been rewritten to accommodate Covid lockdown. He bumbled, he fussed, and he delighted essaying the role with panache.

IMTC veteran Susan Glosco was delightful as the 40-year-old nursemaid Ruth, and came into her own in the ‘Paradox’ trio with Toft and Armstrong-Robley. Louis Dooner was a sprightly Sergeant of Police, leading a band of cross-dressed girls as policemen. Their ‘Policemen’s Lot is not a Happy One’ was rambunctious and ribald. ‘With Cat Like Tread’, complete with a salute to Les Miz and the flag-waving of ‘One More Day’, was led by Armstrong-Robley and the pirates, and was a show-stopping routine that ended with a Rockette’s kick-line.

Christmas and panto-time came early yesterday at Ipswich and it was fabulous fun!