Singing in the Rain. 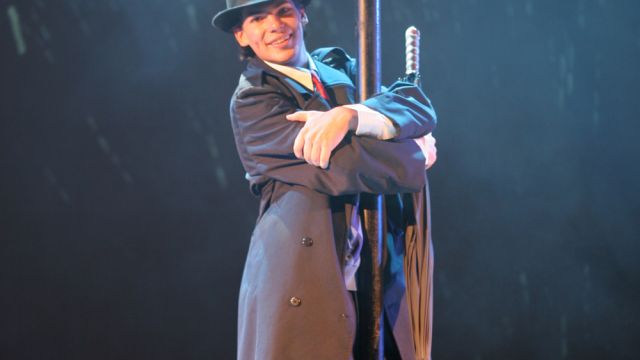 Based on the MGM Film. Empire Theatre, Toowoomba. (Qld) April 1.

What a glorious feeling to sit in a beautiful art deco theatre and enjoy a sparkling performance of a musical from the same era.
Singing in the Rain was the latest professionally directed amateur musical staged by the Empire Theatre. Director Lewis Jones and choreographer Alison Vallette milked every drop of talent from this community.
Seventeen-year-old Ben Gillespie looked too young to play the lead, but shone as the tap dancing movie star Don Lockwood, made famous by Gene Kelly. His sweetheart Kathy Sheldon, played by Shannon Gralow, rose from the pit for this performance. By that I mean her regular performing arts skill is as an accomplished violinist.
The most striking aspect of this production was the film effects.
Craig Wilkinson, a student from the local University of Southern Queensland, used light and film to make it rain on stage and to give the effect of movement through the streets. Who needs a giant set to rise and fall when you can merge the magic of cinema with live performance?
David Spicer