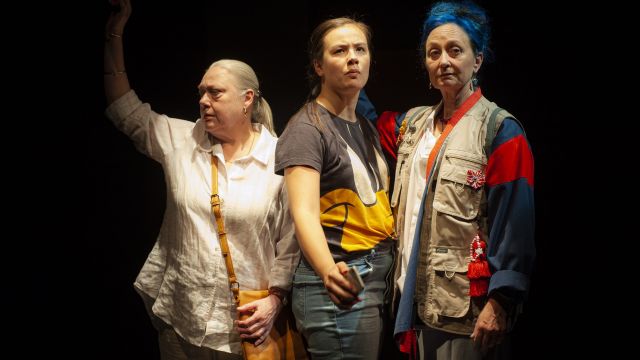 A day in the life of three very different ‘single’ women, each with their own problems, who together search for a pug called Puckle.

The play was developed through Red Stitch’s INK program and was meant to premiere early last year.  Finally, it’s here, and the opening night audience applauded the mere fact that there we were, about to see a live performance again.

Single Ladies is essentially an exploration of three contemporary women.  What we learn of these three ‘single ladies’ is pertinent and contemporary.  Loneliness, age-ism, invisibility, under employment, financial distress, homelessness all can and do afflict ‘single ladies’ – as we are now increasingly aware –with devastating effect. Late middle-age well-spoken Anne (Andrea Swifte) whom we infer is comfortably enough off – financially anyway - used to live on four acres (her term); now she’s downsized, lives in a one-and-a-half-bedroom apartment she bought off the plan, and is trying her luck on internet dating.  Anne’s determination to be a politically correct ‘good person’ reminded me of Camus’ answer to the question, if life is absurd, what should we do?  Camus replied, ‘I try to act ethically.’  For Anne, acting ethically might be all she’s got.  Middle-aged Lilike (Caroline Lee), an aggressive curmudgeon with a rich history, is suspicious and cynical about everything.  She had a half share in a terrace house, but she allowed her brother to buy her out.  He’s sold the property and now Lilike will soon be homeless.  Rachel (Jem Lai) a 20-something girl, is an Uber driver – i.e. as good as unemployed - miserable and desperate, continuously leaving voice mail for someone called Em, who never picks up.

Anne wants to restore Puckle to Liz, a homeless woman who sits outside a Coles supermarket.  Lilike found Puckle unattended so she took the dog home.  Anne and Lilike go to get the dog from Lilike’s house, but it’s disappeared.  When Rachel foolishly admits she’s seen the dog, they rope her in to the search… Caroline Lee’s Lilike is the driving force of the play (although it isn’t ‘Lilike’s story’) and she holds our interest with her unrelenting but amusing negativity from the start.  (Is there anything Caroline Lee can’t do?)  It works because we can’t help but agree with her descriptions and criticisms of our urban world.  She’s bullying, browbeating, lying (as we find out), but fearlessly confrontational and disruptive.  Andrea Swifte’s Anne is lower key – but that’s the role – somewhat at odds, I thought, with the internet dating and her all too calm acceptance of the nasty consequences.  Director Bagryana Popov seems to have gone for sharply delineated characterisation and this is least successful with Jem Lai’s Rachel.  The contrast with Ms Lee and Ms Swifte is too great: it’s as if Ms Lai is in another play, going awkwardly over the top too often and mistaking shouting for emotion.

But perhaps that’s what that role requires and the fault, if it is a fault, lies in the writing (which, it seems, has had some considerable revision since the interview Michelle Lee gave to The Age last year, prior to the originally scheduled premiere).  The characters are given traits and histories to make them ‘interesting’ or funny, but that intention seems more and more contrived as we realise these set-ups won’t pay off.  The (unseen) opportunist who claims to’ve found the dog is a diversion that – in plot terms – is neither here nor there. Single Ladies isn’t the first play in which the search for a missing dog is the ostensible A-plot that holds it all together.  Michael Gow’s 1994 Sweet Phoebe also involves a search for a missing dog, but there the protagonist in her obsessive search experiences layers and pockets of society she never knew existed - thus changing her forever.  In Single Ladies, the three women essentially find out about each other, but what they find out doesn’t have much consequence – except perhaps some unexpected ‘bonding’.  The play undoubtedly has good intentions in its attention to important contemporary issues, but sadly it’s a slight piece.  I wish I could be more positive about brave Red Stitch’s first show for the year, but there it is.