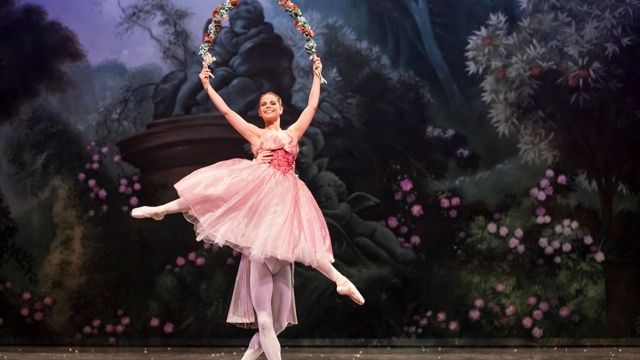 Queensland Ballet’s remounting of The Sleeping Beauty was a popular audience pleaser. Tchaikovsky’s 1890 work, one of the most famous in the classical ballet repertoire, was a good choice to end their 2012 season and a good choice as Artistic Director’s Francoise Klaus’ swan song.

Klaus has a history with the piece, being taught the original Marius Petipa choreography for the Fairies, the Rose Adage, the Bluebird and wedding pas-de-deux by Ballet Master Peter Appel. His affinity with the work shone through in his traditional interpretation of the ballet.

All Principals danced well, with Piran Scott as Prince Desire, Michael Braun as the Bluebird and Eleanor Freeman as Carabosse being particularly good. The corps de ballet were augmented for this occasion with the Queensland Ballet, Professional Year and Queensland Dance School of Excellence Dancers, which meant at times the stage was awash with nymphs and fairies. David Walters’ lighting effects were imaginative, from the lightning sequence in the opening to dawn breaking in the forest; Graham Mclean’s sets were theatrically atmospheric - ethereal in the glade, and majestic in the Royal Court; while Selene Cochrane and Noelene Hill’s costume designs had style and color and were strikingly effective in the Mazurka when everyone was in red.

What a joy it was to see the ballet performing with a live orchestra instead of recorded music. Guest Conductor Andrew Mogrelia demanded excellence from the Queensland Symphony orchestra and they gave it.

Klaus can be rightly proud of this production and of his tenure with the company. He achieved much.