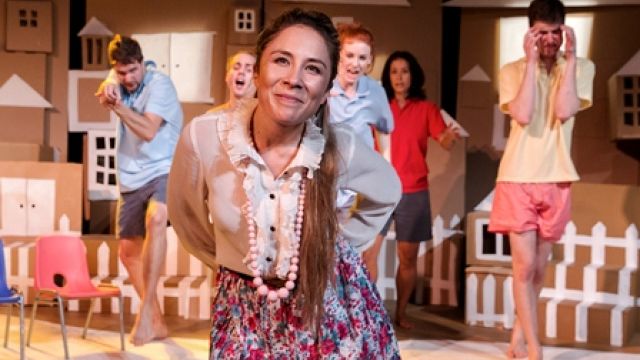 The Small Poppies may be about little Aussie kids and written thirty years ago but this New Theatre production shows it never grows old.  David Holman’s play expresses our 1980s confidence in multiculturalism and, crucially, the power of good teachers to guide young kids to embrace difference.  That, sadly, may sound dated but, with these particular kids at their first day of big school, Holman’s message is never heavy-handed.

It’s the story of a growing friendship between Clint, an Aussie boy grumpy about the man now sleeping with his single Mum, a Greek boy called Theo and an orphan refugee, Lep, who arrives from Vietnam with just three words of English. The busy action is played out against Andrea Espinoza’s cartoon set, reminiscent of Playschool but complete with doors and windows for jokesters popping in and out with naughty gags (remember TV’s Laugh In!). With a chaos further punctuated by constant school bells, we leap through a tumble of effectively comic and warm-spirited vignettes. For director Felicity Nicol, the challenge is energy management. She mostly achieves consistency of toddler-acting from her boisterous and loud young adult cast, but theatrically the production needs some sharper punctuation, especially in driving to its moving climax.

Rosie Lourde is tender real as the orphan Lep; Nick Atkins waves excessively like a windmill but captures the excitable Leo; and Ben Hunter comes an acceptable second to my long memory of Geoffrey Rush in the role. Sarah Hansen is worthy of worship as the teacher, as are the other two actors as parents.

This is a charming show about young natures, so totally egocentric and randomly brutal, but still blooming into humanity. Informed as it is by adult actors, Small Poppies is for all ages.