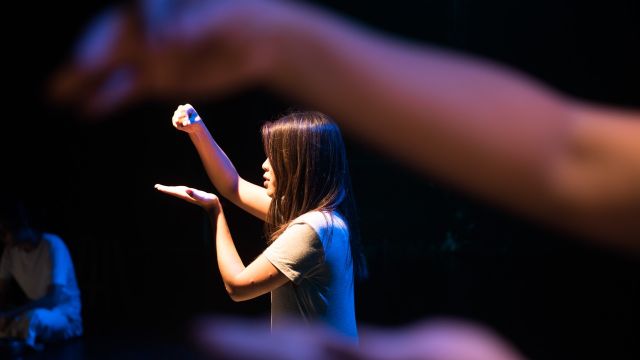 Smoking with Grandma is a ‘mixed media’ work from Hong Kong, involving a warm and loving relationship between a Chinese grandmother and grand-daughter.

You enter the darkened main studio at the Bakehouse Theatre, and the mood is sombre and intriguing. On a screen up-stage is film footage of single wafts of smoke, whilst the stage floor is lit from a single light bulb hanging from the ceiling, under which is single wood chair.

A young girl appears and looks at the screen, which is now showing the national flag of Taiwan. She asks her unseen Grandmother what is this flag; then from the dark auditorium, from the audience, comes the Grandmother. She is Taiwanese and this play is a journey home, a journey from being a displaced refugee in Shanghai and Hong Kong, and then finally home to Taiwan.

The Grand-daughter is a dancer and goes to London on a scholarship leaving her beloved Grand-mother, who is patiently waiting in Hong Kong for many years to be given permission to return to Taiwan. The two female performers tell this beautiful, poignant tale simply and extremely effectively. It covers a time and event in Chinese history in the 20th Century about which one knows very little; subsequently it is highly enlightening as well as very moving.

This is a tale about being a refugee, about isolation and the determination and strength that love can give in times of adversity. As well as smoking. In a disarming and moving way this play offers up a reason for smoking. In fleeing through war-torn revolutionary China in the 1930s the Grandmother has nothing except for her pipe. As the Grandmother reveals, in this situation, and in her later trials the pipe offers solace, as it is her only companion.

This all may sound rather depressing, but it is not; it is a deeply profound and moving tribute to human survival. There is no anger, no rage, despite the ordeal, but stoic and human resilience, determination and love.

Smoking with Grandma is just one of a few works from Asia in this year’s Fringe Festival, and I thoroughly recommend it.