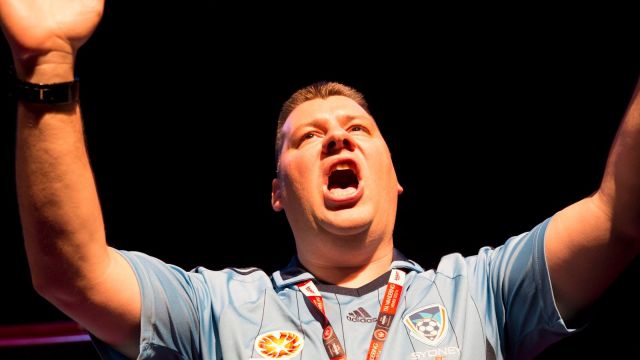 A play about football needs a bit of an explanation for a theatre audience. David Williams makes it clear this is about “the game with the round ball that you play with your feet, sometimes referred to as ‘soccer’”. He tells us that Sydney FC supporters are called “smurfs” because they don sky blue and white; “Wanderland”, if you didn’t know, is the nickname for the home ground of their cross-city rivals: the Western Sydney Wanderers. This story is about Williams, originally from Sydney’s west but now a sky blues fan, who takes up a Wanderers membership (the games don’t clash) and defiantly wears his Sydney FC colours to Parramatta.

Smurf in Wanderland is a play about the tribalism of sport and the fascinating split, in this case between the western suburbs of Sydney - where people share a sense that they have “been doing it tough” - and the rest of the city. These two tribes are divided by a lot more than their club colours.

This is a clever one-man play by the writer, producer and director David Williams, who also performs the piece. The set-up is simple: he’s a football fan on stage telling us - the largely ignorant theatre audience - about his devotion to Sydney FC and love for the game. He celebrates the tribes but also speaks out about the racism and bigotry that sometimes comes with them.

Even if you’re not a football fan, this is an entertaining piece - Williams manages to transcend the sport and elucidate the unwavering devotion it inspires. He is an engaging performer - the everyman who’s easy to relate to, even when he’s desperate to return to the stands soon after the birth of a child. Williams gets the audience actively involved too, split into rival groups of fans and asked to hold up banners and recite chants. 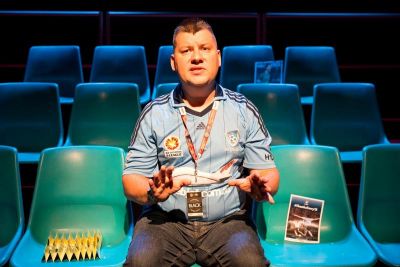 The play is well-directed by Lee Lewis, the Griffin artistic director in her first production for the National Theatre of Parramatta. The set is three rows of stand seating, with key moments such as media coverage shown on screens. This helps hold attention and keeps the pace.

But the play runs for more than two hours, including an interval. While Williams is brilliant, the work would be better trimmed.

Smurf in Wanderland says a lot about Sydney, and not just its soccer teams. The only time Western Sydney gets attention “is when something goes wrong,” Williams notes, or if there’s an election. The neglect gives Wanderers fans a sense of unity, whereas Sydney FC struggles to form an identity beyond its corporate brand.

A shorter play could better focus on these issues. But Williams has done a nice job bringing a different story to stage: one that’s central to how this city is divided and how it comes together.