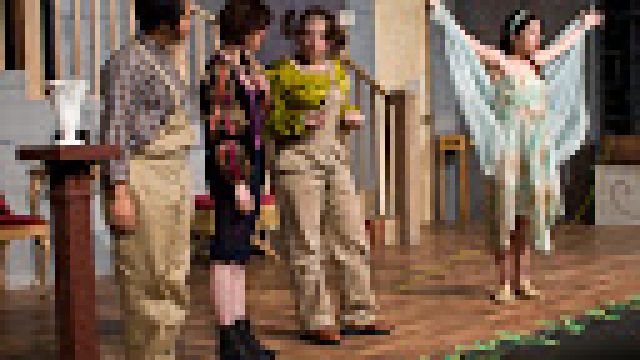 To an entranced, captive audience nine youthful, engaging and lively actors, with lashings of potential ‘strut their stuff’ in a mildly spoofed up version of that old favorite fairy tale Snow White.

The production is opened strongly with the Queen, played boldly by Elizabeth Dingle, in conference with the Magic Mirror, a fabulously costumed and glitzy character well interpreted by Ian Robertson.

Natassja Lindrea, as a strikingly attractive and particularly vain Snow White, is well paired with Zac Smith’s handsome Prince Charming, an equally self-satisfied individual. Amusingly he is on the lookout for his second wife, since divorcing the apparently mouse and pumpkin obsessed Cinderella.

There is a moral somewhere in this story, if a little muted. It is most clearly expressed through the Huntsman’s character.  As a loyal servant he is unaffected by fleeting youthful beauty.  He is steadfast in his deep love for his mistress, the aging Queen, regardless of her mean, jealous and murderous tendencies.

There are even some strange little moments of gay frippery when the Prince and the Huntsman dress in drag to scatter clothes everywhere as segue into the next scene of chaos at the Dwarf’s house.  It leaves in its wake a poignant reminder of the rich history of how camped up and over the top Christmas Pantos can be.

The four Dwarves are unexpected in number as well as in names and natures.  As Dummy, Taylah-Jayd Sofele fulfills her role with appropriate vagueness, but is a little to hidden below a largish hat.  Bossy, played by Silvi Van–Wall with strong focus, is alive, alert and always ready to move the action forward.  Trekky, played by Ella DiMarco, is a clear and sustained ‘out there’ character.  And Jess Cook’s Smelly is so convincing one can almost smell her.

It is great to have a Christmas treat, in the tradition of the pantos of yesteryear, to take the kids to. I was able to indulge a 10 and an 8 year old.  Due to a hefty drive we arrived in the nick of time to discover that HTC is very punctual in its show times.  With the house being almost completely full, the children sat in front of the stage on the floor.  As I kept my eye on them - they seemed to be fully engaged for the whole 80 minutes despite the acting and set changes dragging a little from time to time.