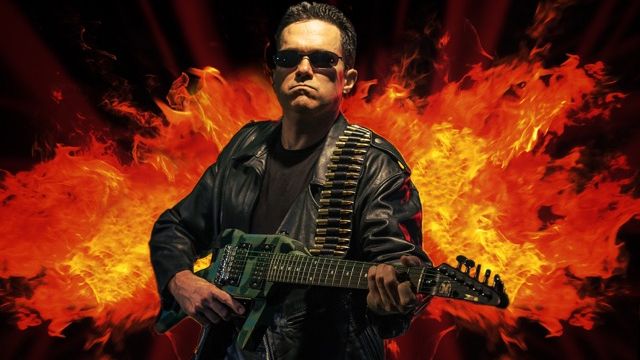 There is so much on offer at The Melbourne International Comedy Festival that sometimes shows that deserve to be seen fall through the cracks and have to rely on word-of-mouth or the odd critic who deigns to cover them, to find an audience. Songs for Sarah Connor falls into this category. Fortunately the word of mouth could be nothing but terrific and this critic certainly enjoyed herself.

Alistair Tomkins is a clever writer and performer and here he gives us a film/cabaret/musical which has appeal to even those who aren’t terminator fans, though it’s hard to resist Tomkins’ marvellous impersonation of Schwarzenegger as  T-800, it’s so witty and truthful. Arnie excelled in the Terminator movies because he is so wooden and robotic as an actor, so his lack of talent was perfect. Tomkins is very talented and the show includes laugh out loud dialogue and parodies of well-known songs (From Gershwin to Creed) that will decimate the funny bones of those who know the originals. I defy you not to laugh out loud at “The Gun’ll Come Out Tomorrow”, sung in a way Annie could never have imagined, or “Let’s Blow Your Whole Head Off” to the Astaire-Rogers favourite. The story is simple and doesn’t move far from the films – T-800 is sent back in time to kill Sarah Connor and ends up falling in love with her. To see T-800 in his leather gear and an apron, doing the housework, is a little gem of a moment. But this is a true homage, not just a piss-take. Tomkins never breaks character, never imposes himself on the scenario. The machine gun shaped guitar in camouflage colours is a stroke of genius.

Sarah Connor is in the talented hands of Ruby Clark – a young woman who has a great sense of comic timing as well as pathos, and an incredible voice that can belt and whisper. She makes Sarah a warm and endearing character and I suspect this relatively new talent is destined for great things.

Completing the cast is the very talented Dominic Woodhead, who is not only a talented pianist, but singer and actor as well. His narration takes us into the story and provides links where needed, and he’s a terrific accompanist.

Penny Farrow uses video images to convey the text which programmes T-800, and ties into the film theme, and confidently blocks the piece. There’s also a nice touch in actually introducing Sarah, which I won’t spoil.

The show needed a little tightening on opening night, but that’s to be expected. All in all, this is one you really should make an effort to see, especially if you’ve overdosed on pure stand-up and a lot of expletives. Solid entertainment that is original and funny is hard to come by. Hurry though, you only have a few more nights