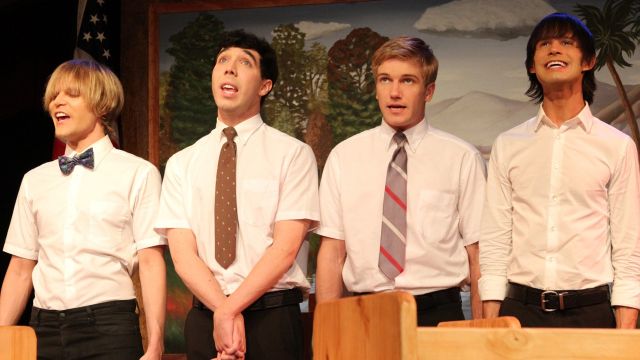 Set in Texas, the plot follows four boys from childhood to their early twenties as they search for answers about what it is to be gay in the South, in the church, and their quest for answers about their sexual orientation.

Mark (Emerson Collins), a preacher’s son, questions the church’s teaching on homosexuality and also acts as a narrator, TJ (Luke Stratte-McLure) loves Mark but is in denial about being gay and ends up marrying a woman, Andrew (Matthew Scott Mongomery) acts on his urges, but his guilt is tragically unbearable, whilst Benny (William Bell) embraces his gayness and grows up to become a flamboyant drag queen, Iona Trailer (as in I Own a Trailer).

All four are good friends who attend the local Baptist church which is presided over by a ‘hellfire and brimstone’ preacher (Newell Alexander). The action is punctuated with segues to a local gay bar where long-time ‘barflies’ Peanut (Lesley Jordan), a waspish old queen, and Odette (Dale Dickey), an alcoholic, bitch to great comic effect and watch a handsome stripper and Benny as the bar’s drag queen, Iona, do a Tina Turner impersonation.

The action is also interspersed with original gospel songs by Joe Patrick Ward, who doubles on piano as Brother Chaffey in church and Houston as the bar’s ‘Piano Man’.

Shores’ writing is incisive and unsettling as the four boys transition into adulthood, yet it’s also laugh-out-loud funny and pathetic when Peanut and Odette bond over life and the human condition.

Although they get little stage time, Rosemary Alexander and Bobby Eakes are effective as head-in-the-sand mothers.

In the end it’s the spiky humour that makes this gay coming-of-age story so arresting and powerful.