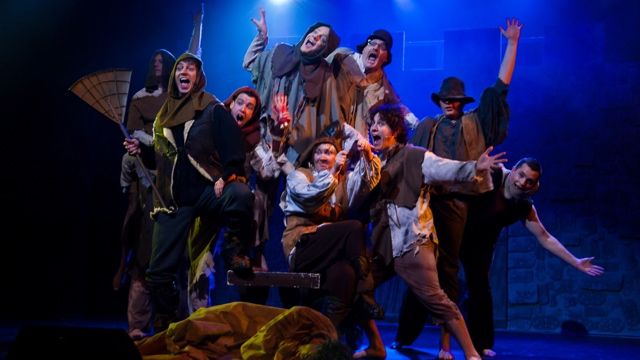 Spamalot is a musical that is heaven sent for community theatre. In fact I think it suits the amateurs better than the professionals. I say that having seen Spamalot on Broadway and now in the Rockdale Town Hall.
The musical was of course lovingly ripped off from Monty Python and the Holy Grail.
The original movie was low budget. The Python crew claimed creating simulated horses hooves with clashing coconuts (the classic radio sound effect) was cost-based.
So having the Black Knight lose his arms and legs in a sword fight with King Arthur in an amateurish way is perfect.
Having a thin looking set - which rotated on stage to become the exterior of a castle or the interior room felt just right.
When a white stuffed bunny rabbit cut off the head of a knight - and later appear covered in tomato sauce - well why would anyone spend any more than that.
Having said that, this production by the Regals Musical Society was performed exceptionally well, and made me dream that one day Sydney's community theatres can challenge Melbourne's for depth and quality.
I thought the stand-out performance was by Tim Watson, as Not Dead Fred/Prince Herbert. He was, in my view, even more entertaining than the original actor in the movie, and when he turned Sir Lancelot (Mal Christian) into an Oxford Street macho man it brought the house down.
Bravo also to leading lady Virginia Natoli, who stepped in to take over The Lady of the Lake role with one week's notice.
For showdates see our On-Stage Section.