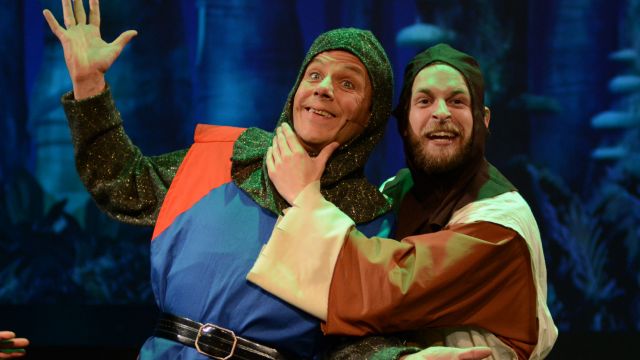 What can one say about Spamalot, except that it is totally ridiculous, as one would expect from a Monty Python idea. This musical, “lovingly ripped off” from the motion picture Monty Python and the Holy Grail, does great justice to the craziness of the genre, and this production by Bankstown Theatre Company lovingly embraces the whole idea.

Director Simon Fry has made the best use of a small and difficult stage, clever blocking and use of spaces coupled with digital projections, a couple of tower set pieces and a riser. What more do you need? A cast and crew well trained in the movement of a few other props and simply set pieces.

That simplicity allowed the audience to concentrate, if there is time amongst the mayhem, on the story, and there is one.

Fry has assembled a well-balanced cast of comics led by Robert Mason in a controlled portrayal of King Arthur. Nicholas Richard provides us with the underdog manservant Patsy. In this role, Richard allows impeccable timing to let the comedy flow. Then add Josh Ridge, Daniel O’Connell, Jason Oxenham and Adam Ring as the Knights of the Round Table, as well as many other pivotal roles to boot, and we proceed on the journey to find the Holy Grail.

These roles are well played by the four mentioned, who have the knack of milking the comedy to the utmost.

Andrew Jackaman then plays another 4 characters, each one different and appealing.

Perhaps his portrayal of Sir Herbert will be remembered by his children for a long time.

Spamalotis a one woman show, and Chiz Watson fills that role. Miss Watson has played many of the big roles in musical comedy, big being the key word in this case. A beautiful mixture of pure comedy and campery fills the stage with her masterful presence.

Then add an ensemble of 6 girls and 6 guys, all playing a multitude of bit parts and filling out the production numbers. The assembled cast of 20 all have a good time on stage and that feeling is embraced by the audience, who also had a good time.

As mentioned, the set is simple. The costumes are not, 150 in all, beautifully created by Arthur Pickering and his team. Most cast members have lots of quick changes, one actor has 10. Perhaps the real stars of this show are the team of backstage dressers. This is one of the most beautifully dressed shows I have seen for a long time. Musical Direction is by Ian Buchanan. Although this production uses a classy soundtrack accompaniment, the songs have to be taught, dances have to be set and all to fit with the recording, and that is a new skill for musical directors. Mr Buchanan has used that skill well.

Lauren Butler has created amusing choreography for this fast-moving show. It is well suited to the piece and the capabilities of the well drilled cast.

This Spamalot provides a totally enjoyable theatre experience. If you are expecting Chekov or the deep and meaningful then don’t come to Bankstown for this show.

If, however, you are prepared to leave your brains at home and want to experience a comedic romp with accompanying belly laughs then book immediately to see this Spamalot, which runs again next weekend. Well worth the trip to the Bankstown Arts Centre