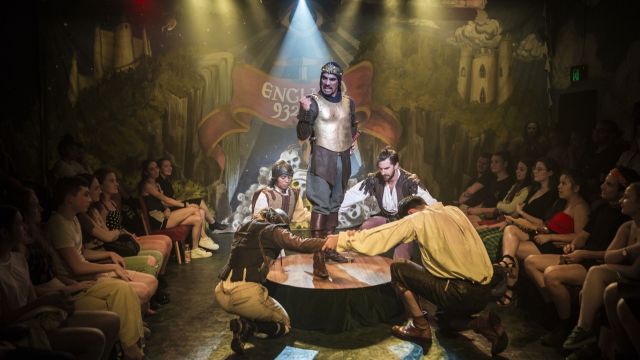 Let’s be honest, for committed lovers of musical theatre Spamalot is, perhaps, a steaming crock of Idle-ness (the Eric kind); whereas to true believers it is an homage to the ‘genius’ that is Monty Python and all things kitsch.

Whatever the truth, Eric Idle knew enough to make the Broadway production (nominated for 14 Tony awards) into an extravagant piss-take, with lavish costumes, sequins galore and plenty of Broadway references to keep the self-aggrandisement of Broadway first-nighters happy. With the legendary Mike Nicholls directing (he won a Tony for the show), they also had the benefit of the brilliant comic talents of Tim Curry, Hank Azaria and David Hyde Pierce. Broadway had never seen anything like it, before or since (some would argue that is not an excuse for reviving it).

But what does a relatively new director like Richard Carroll do without that sort of budget to hide the myriad of overworked gags and gay references? Well…he doesn’t. He goes the exact opposite.

Carroll’s own production company mounted this version at the Hayes Theatre (which seats 111 people …so a sell-out is always achievable) and the director fills it with high energy performances from a terrific cast, lots of audience participation, and more campery than Ru Paul’s Drag Race. With some 50 members of the audience seated on stage, divided on both sides, the performing area is so tiny that dancers bump into each other, and audience members are seconded to hold props, join in a can-can line, and even act as soldiers pelting each other with ammunition (buckets of paper balls). It’s frequently funny, always camp and terminally chaotic. With (deliberately) badly painted back-cloths, hung full of creases, and props that look like they are made in a very unskilled “Men’s Shed”, the whole production (with a recorded soundtrack) looks like a Community Theatre production - in a weird and impoverished community.

But does it work? Well yes, if you ask the normally staid Gold Coast audience on Opening Night…a resounding Yes! They loved it…especially after the shaky start which saw everyone adjusting to a much bigger stage and literally finding their feet and their style. The greatest asset, apart from Carroll’s down-market vision, is the marvellous fully committed (some probably will be after this tour) cast, whose energy is infectious. HOTA’s main theatre holds 1,100 people (10 times that of the Hayes) and though it was not completely full, it must have spurred on the cast to see hundreds and hundreds of waving arms during “Always Look On The Bright Side Of Life”. Carroll has kept most of the Broadway references but has done his homework and added lots of local references to get the Gold Coast audience onside. It’s all absurd and wonderfully crazy. Cramer Cain has exactly the right demeanour and stage command for buffoon-like King Arthur. He plays it straight, which makes it even funnier, and has great presence. Josie Lane, a performer I’ve admired many times in cabaret, brings her huge range and belting voice to the Lady of the Lake. Her Diva’s Lament song in the second act, “Whatever happened to my part?” is a hoot and she milks it for every reaction she can get. The send up of all Broadway love songs “The Song that goes Like This” is a showstopper for laughs, but also terrifically sung  by Lane and the charismatic, multi-talented Blake Appelqvist, who seems able to do anything on stage and look a million bucks doing it. Marty Alix is not David Hyde Pierce but brings his own strengths to the cowardly Sir Robin – and owns the audience with the cleverly constructed “Star” song - .replacing the hilarious but truly offensively Anti-Semitic “You’ll never succeed on Broadway”. The replacement lyrics are by Carroll himself, Virginia Gay and Rob Johnson. They give a nod to local Aussie celebrities, both real and wannabe – and the last line, “Anyone know how to contact Shannon Noll? – I think he’s in Jail”, brought a roar from the audience.

Rob Johnson is an astonishing talent, with a great voice. He is delicious as Prince Herbert but also delightful in his other roles. Abe Mitchell is fittingly stunning as the homicidal Lancelot (his slaying of the front row of the audience was hilarious) and adds both presence and another strong singing voice. Amy Hack, as Penny the trusted steed, is endearing and has the show’s hit song, and a great tap routine to impress, and Jane Watt adds strength to the cast although her Sir Bedevere is perhaps under-developed. But it’s an impressive cast and such a treat to see performers we might not see in starring roles on the main stage -.for reasons the song tells us. It’s all about bums on seats.

Cameron Mitchell brilliantly utilises every square centimetre for the choreography and the bizarre take on the ensemble tap routine is a treat.

The kitsch design is by Emma Vine, and Katie Sfetkidis designed the lighting, which did suffer somewhat from the rig in theatre one. The foots/downstage area were in darkness most of the time and an additional lighting bar would have helped enormously.

I haven’t mentioned the plot because if you’re a Python fan you already know it, and if you’re not, well, there’s a 99% percent chance you will miss this enjoyable entertainment. It’s slight, silly, groan-fully corny, super-camp and painfully self-aware - but that’s the show, not the production. And there’s not a Sondheim in sight!