Speaking in Tongues by Andrew Bovell 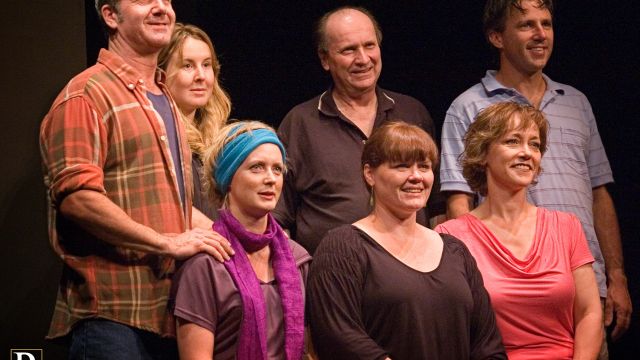 Speaking in Tongues is a tricky piece of theatre by anyone's standards. Four actors (Bobby Babbin, Glenn Hermann, Judy Jankovics and Vanessa Merewether) play four characters (two married couples) in the first act, and then portray five entirely different characters in the second act, with only one character from Act One returning in the second half. Act One consists of several distinct chapters, while Act Two is basically a re-enactment of the two stories which were related in two monologues delivered by two characters in Act One. The basic theme of the piece is sexual jealousy and also how our baggage can cause people to 'project' and to be judgemental. The title of the film, which was based on this play, conjured a far more apt metaphor:
'Lantana’ is a deceptively attractive plant which can also be a dense, malignant weed which grows out of control, strangling everything in its path. Describing and then critiquing the theatrical constructs employed in this piece would take up way to much space. Suffice it to say that the dialogue continually overlaps and intersects, requiring the director to adopt the mindset of an orchestral conductor. Bovell is undoubtedly an insightful story teller, but his dialogue doesn't exactly trip naturalistically off the tongue. Therefore the cast certainly have their work cut out in creating their different characters and my hat's off to them for maintaining character and focus with such heavy handed theatrical gimmicks working against them. Especially solid work from both Merewether and Babbin, while Jankovics was outstanding in Act 2. My main criticism rests with the director's odd choice of having Babbin delivering most of his long monologue whilst leaning against a side table at right-angles to the audience. I'm not normally a stickler for overtly 'proscenium-aware' direction, but the awkwardness of the blocking prevented the actor's use of his physicality and as 90% of communication is non-verbal, it's little wonder I missed a couple of vital plot-points, having been distracted from the poignancy of his speech. Having said that, any community theatre director brave enough to diverge from the usual staple of trite comedies, in order to tackle something genuinely challenging for the actors as well as the audience, deserves to be congratulated.
Rose Cooper